At the heart of this photographic exhibition is the theme of journeying. Several journeys, in fact. There’s the story of Birmingham in recent centuries, as it found itself a part of Britain’s transition from world imperial power to one of less influence.

There’s the journey of peoples who, as British citizens moving from commonwealth countries, made their lives in Birmingham in the dying days of empire, and whose families live on in the city, contributing to its economic, cultural and social fabric. And there’s the journey of photography as an art-form, and the changing ways in which the lens has been used, from portraiture to documentation, from composed pictures to informal shots. Inclusion of this in the exhibition adds a rich and unexpected dimension. 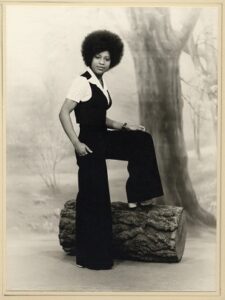 The first part, City of Empire, draws on photographs from the Dyche Collection. Self-taught photographer Ernest Dyche and his son Malcolm had a studio on the Coventry Road, and later a second studio on Moseley Road. In the 1950s, Dyche turned his attention to portrait work of the first wave of migrants arriving in Birmingham from Africa, the Caribbean and the Indian sub-continent. Most of those photographed are anonymous, only their clothing and their appearance giving clues as to their country of origin. All tell a story of global connections as a legacy of empire.

The second part, City of Diversity, brings together examples of work from more recent photographers, including Vanley Burke, Janet Mendelsohn, Nick Hedges, Maryan Wahid and the Ten.8 Collective. Each has been instrumental in documenting the lives of diverse communities and in challenging racism, inequality and discrimination. Their inclusion provides an important reminder of how our understanding of Birmingham has been shaped by their work, and of their contribution to photography and to the city.

The exhibition’s narrative was clear, if a little thin in places: the section on the Politics of Empire was limited to an account of Joseph Chamberlain, Birmingham’s first mayor, who went on to become Colonial Secretary in 1895, and an account of British brutality at Mafeking. A section on Collecting Empire/Collecting People had more to add, showing how photography was used in capturing, portraying and ranking different races – the camera itself being used as a tool to reinforce prejudice and bigotry.

Schools have been involved in the project; pupils’ work on display indicated that they had really engaged with the exhibition and its themes.

The exhibition concludes with a compelling quote from author and political activist Ambalavaner Sivanandan: “We are here because you were there.”