I don’t suppose I’m the only football supporter with an irrational dislike of certain clubs. One of my many is Southampton, although there are at least a few solid reasons why I would happily see them descending into the bowels of non-league oblivion. The first of those was their old ground, which had the worst away end in the country and was a place where visitors were definitely made to feel as though they weren’t wanted. Another is my oft-repeated disdain for clubs who get a new ground, twenty thousand new supporters and suddenly start getting ideas above their station, thinking they’re our equals and such nonsense. And to cap it all, they’ve spent far too long doing better than us on a fraction of our budget and usually winning when we play them. Which is why only scoring four today was the one minor disappointment of the afternoon.

The Dell might have been a horrible place for visiting supporters, but everyone sitting in the away section has loved Villa Park lately. Turn up, spend ninety minutes in palatial surroundings, see your team win. It was getting to be a habit and learning that Calum Chambers and Ashley Young were being drafted into a covid-stricken defence, with the usual fitting of square pegs into round holes elsewhere, gave no real encouragement that the situation was likely to change. And so, naturally, we enjoyed the biggest win of the season and by far the best performance. 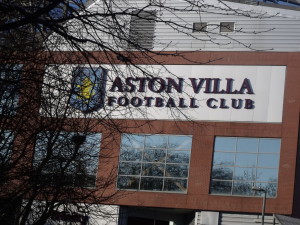 Southampton were in good form going into the match and looked lively early on. Then on nine minutes Philippe Coutinho started a move, Danny Ings carried it on and Ollie Watkins showed what he’s capable of doing to put Villa into the lead.

Watkins and Coutinho then missed what should have been straightforward chances for players of their quality before a perfectly-weighted pass from Chambers to one Brazilian international allowed another, Douglas Luiz, to score Villa’s second from close range on half-time. That sentence might still be difficult to take in but I’ll never tire of writing it.

The third came from a bit of a goalmouth scramble and another touch of Brazilian magic as Coutinho somehow found room to score from inside the box. A fourth was inevitable and turned out to be the most deserved, with Matty Cash finding Danny Ings to hit home first time. There was plenty of time for more, but Villa seemed happy to settle for four-nil and the rare luxury of being able to bring on substitutes with the game won.

Coutinho rightly took most of the headlines, and should now be safely locked away after every match until his move is made permanent, although almost every player in the team also deserves plenty of praise. Luiz had his best game for a while, John McGinn was an improvement on recent weeks and there were signs that Watkins and Ings might, after all, be a partnership worth persevering with.

That’s one bogey side out of the way and on Thursday there’s the chance to beat another, when we travel to Leeds. What was that about irrational dislikes?