Opportunity to see behind the scenes of historic city centre theatre.

Iconic Birmingham theatre The Old Rep has announced they will be resuming their venue tours next month. The doors of the 109-year-old theatre will be opened to reveal a fascinating history. This will be the first time since the Coronavirus pandemic that audiences will be invited to step backstage to hear stories from over a century of performance.

As the UK’s first purpose-built repertory theatre, The Old Rep occupies a unique place in British theatre history. This iconic venue, founded by Sir Barry Jackson, was the original home of the Birmingham Repertory Company until their move to the current Broad Street site in 1971. 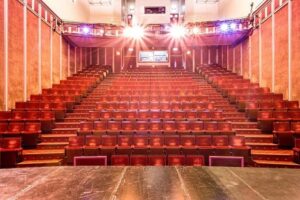 Over the years the theatre gained a reputation as one of the most radical playhouses in the country and was the first in the country to stage Shakespeare in modern dress. The range of rich and varied roles on offer had actors flocking to join the company and learn their craft, and the theatre went on to play a central role in the early careers of many of the UK’s most celebrated actors and theatre makers.

Many notable names have trod the boards at The Old Rep since its opening in 1913, including Sir Laurence Olivier, Dame Edith Evans, Sir Derek Jacobi, Albert Finney, June Brown, Michael Gambon and many, many more.

In 2014, Birmingham Ormiston Academy successfully tendered for The Old Rep Theatre. Breathing new life into the theatre, BOA has once again made the theatre a vibrant hub for artists, providing high quality arts, performance and training for young people at the heart of the West Midlands. The Old Rep continues honouring its original purpose, to be a training ground for the next generation of theatre makers.

The venue tours will give ticket holders a chance to explore the venue’s auditorium and backstage areas. Led by a knowledgeable guide, you will discover the original features of the theatre, step inside the dressing rooms used by the stars of the shows and hear stories of wartime defiance and trailblazing theatre makers.