Simon Hale is enchanted by the Alexandra Theatre’s latest production.

The old razzle-dazzle is back in town with a night of sleaze and seduction that simply sizzles.

The classic Broadway musical – Chicago the Musical – about murder as showbusiness, with lyrics by Fred Ebb and music by John Kander, is a darkly comical delight from start to finish.

There is no razzle dazzle set at the Birmingham Alexandra Theatre, but the lack of scenery in this touring production only increases the focus on the action and characters, as well as the tiered jazz orchestra which shares the stage. 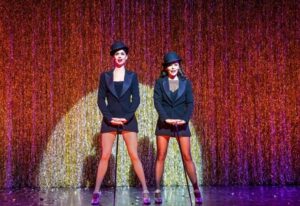 On board is celebrity lawyer Billy Flynn, played with aplomb by TV star Darren Day, with a strong singing voice and a convincing expertise in the art of duping the media with an invented defence.

This is 1920s America where an all-powerful mob was undermining Prohibition laws and murder trials were such entertainment that the glamour of a woman could determine their guilt to an all-male sexist jury.

Sinitta Malone shows why she made fifteen hit pop records as the jail matron Mama Morton, singing a belter of a number with When You’re Good to Mamma.

But the production belongs to the two publicity ravenous murderesses, Roxie Hart (Coronation Street’s Faye Brookes) and Velma Kelly (Djalenga Scott), as they vie to outdo each in the publicity stakes.

Sultry and seductive, the rouged and stockinged duo turn it on in a thrilling way when it comes to their singing range and high-kicking dancing skills, their performance guided by the delightful choreography of Ann Reinking in the sexy, black-dressed angular style of Bob Fosse.

The vivid and imaginative songs come thick and fast, including the stand outs Velma’s I Can’t Do It Alone, Roxie and Velma’s Hot Honey Rag and, of course, All That Jazz and Razzle Dazzle performed by an altogether strong company.

Lively too is the band, under the baton of musical director Andrew Hilton. who add an exciting and interactive dimension to the evening and even play on pleasingly after the curtain call. This is a show that should not be missed.