On one level, you might say that the skill of puppetry lies in getting the audience to focus on puppet, and not on puppeteer. On a deeper level, maybe the real skill is in getting you to believe in the inner life of the creature the puppet represents, and to follow its emotional journey. On this basis alone Animal Farm was a triumph.

Orwell’s novella, on which this production is based, is a tale of how the animals on a farm overcome Farmer Jones who exploits and abuses them. And it is a tale of what happens when they seize the reins of power. For an audience to not only witness, but to feel the emotional impact, of what happens when power shifts, bit by bit, from equality to tyranny, makes for compelling theatre.

Movements and mannerisms of the animals are used to maximum effect to convey their shifting position in the pecking order. The gait of the pigs, particularly Napoleon who soon establishes himself as leader, demonstrates their rising dominance. In contrast, the slouching shoulders of Boxer, the carthorse, show him as the loyal and tireless worker who believes mistakenly, to the very end, that the new regime will bring freedom. 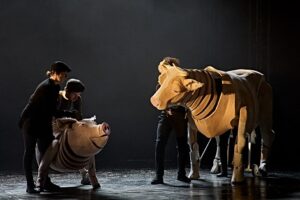 Above the stage, illuminated text is used to convey information on animals killed over the course of events: name, age, how they died. It reads like the grave markers in a war cemetery: the shock at the waste of life is palpable.

Orwell’s Animal Farm is a political allegory about revolution, written in the context of what went wrong when Czarist Russia evolved into Communist Russia. But, in reminding us of some of the tactics used by those in power to build and retain their authority, the allegory is timeless. As Napoleon and his chief sidekick, Squealer, deploy political rhetoric, rewrite history, and slowly erode the machinery of democratic government, we are left to draw our own conclusions about how the allegory applies to the present day.

Despite its serious theme, much is made of humour, the sheep in particular bringing a comedic element. Small scale models and puppets are used to convey parts of the story, whilst the sound track adds to the drama, developing into a wall of sound to give a sense of rising tension. The set is sparse, but lighting gives it depth, alluding to hidden corners full of mendacity.
Animal Farm is presented by The Children’s Theatre Partnership and Birmingham Rep. It’s the kind of show in which all members of the creative team deserve a mention, not least the fourteen actors/puppeteers and the team which created the thirty life-size puppets.

The production is directed and adapted by Robert Icke. Animal Farm is on until 5th February. Details.