This week I went out on an office do (it was a party of six before anybody says anything) with the main venue Ghetto Golf at the Custard Factory. I love Digbeth, not because it’s Peaky Blinders territory or even because I’m a bluenose but because of its unrivalled street art. 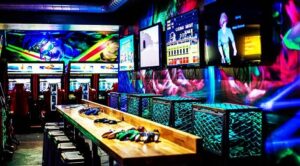 We started off at the Anchor in Bradford St, still going strong after many years, and moved onto a pub in Floodgate Street called the Ruin. It’s changed hands many times but now majors on being decorated in a way that makes shabby chic look pristine.

At one of those pubs I tried a Stirchley Brewery beer but to be honest it was disappointingly sour and fizzy. In fact, apart from a pint of Titanic the beer was disappointingly gassy everywhere we went and there were even worse options at Ghetto Golf, which gave me the choice of lager, lager or lager. I even asked whether I could have a pint of mild, a question which was met with a puzzled frown and a look of complete confusion.

We also went to the mysteriously named NQ64, which was packed full of arcade machines but apart from pinball, mine was a dismal showing. In fairness, my speciality of tennis or football ping ponging on the screen was nowhere to be seen. I even looked in vain for any football games but there just seemed to be a penchant for shooting and destroying thing.

Having said all that, Digbeth had a great off the wall vibe and beer apart, it’s a unique one-off experience to the senses and let’s hope HS2 doesn’t change things.

As a footnote I partly redeemed my pathetic arcade showing by finishing runner-up in our party at Ghetto Golf!