In the town of Baltese, nothing much happens. Recovering from a recent war, it is populated by people whose passion is routine and whose lives are ruled by discipline. Yet Peter stands out since he dares to dream and to have hopes. Driven by the need to find his sister from whom he was separated soon after birth, Peter’s quest begins when a fortune teller reveals that an elephant will lead him to her.

Fortuitously for Peter, an elephant appears in the town: conjured up by a magician, it falls through the opera house roof. Conveniently, it provides a metaphor for the multi-layered themes of this show.

The RSC’s first indoor piece since March 2020, the production is expansive in ambition and in staging. Its centrepiece, a puppet elephant, is suitably colossal. 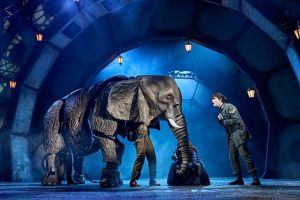 The Magician’s Elephant explores the question of how people act at times of crisis and social constraint. Some seek out a figurehead to look to, and the elephant seems to offer easy solutions: “One touch of the elephant and all your dreams will come true.” Others, particularly those with privilege, try to exploit the situation for self-advantage.

A few stand against the flow, and see that freedom is essential if we are to be self-fulfilled and happy. We are clearly being asked to reflect on our own responses to the extraordinary times we live in.

The themes of routine and conformity are expressed through costumes which are three-tone in colour, black, white and grey. The set, a gloomy archway, is equally sombre, although it comes into its own when brilliantly lit with night starts in the final scene of hope and optimism.

The musical score maintains a steady rhythm for much of the time, again reflecting a sense of compliance and routine, broken only by characters which challenge the norm. Summer Strallen as the Countess and Sam Harrison as the Count, in particular, sing against the flow as they attempt to exert their status.

Whilst the curious story-line is strong enough to keep you engaged, it is, thankfully, brought to life by humour: the narrator, a twinkle in her eye, brings to the stage an ironic commentary on the goings-on, whilst the Countess and Count provide stock comic characters. As the citizens of Baltese queue up to see the captive elephant, they sport elephant ears and trunks – a delicious and comedic comment on contemporary culture.

Yet sometimes the production feels a little uncertain of its ground, and its use of metaphor somewhat overblown. Comedic, Cruella de Ville style, scenes between Countess and Count work well within themselves, but contrast oddly with emotionally-charged scenes such as those between the police officer and his wife lamenting the fact that she is unable to bear children. We are left uncertain of the relationship between the production’s cartoon-like and social realism elements. The role of Madam LaVaughn, crushed when the elephant crashes through the opera house roof, is minimal, and we are left to wonder about her fate.

Of the elephant itself, both puppet and puppetry are remarkable, with movement and mannerisms well-captured. Yet, oddly, the elephant often takes backstage, a presence rather than a player in events.

The large cast perform, sing and dance their way through the production with energy and zest. Jack Wolfe is outstanding as Peter. Amy Booth-Steel provides a compelling link between actors and audience as the narrator, whilst Miriam Nyarko plays a powerful Adele.

The Magician’s Elephant was directed by Sarah Tipple. It is a musical adaptation of the book by Kate DiCamillo, with Nancy Harris (book/lyrics) and Marc Teitler (music/lyrics).

The production is at the Royal Shakespeare Theatre, Stratford, from 18th October to 1st January. For further information visit rsc.org.uk.