Simon Hale watches the young saxophonist combine with the CBSO.

Saxophonist Jess Gillam led the CBSO on a jaunt through American music at Symphony Hall in a manner that couldn’t have been more joyful or more apt. As the backbone to music across all genres, it was the sax that helped usher in 1920s America as a new post-war and post-pandemic era of freedom and fun.

Gillam’s talent and appealing personality has meanwhile been attracting younger audiences as the presenter of BBC Radio 3’s The Classical Life, having also been the first saxophonist to reach the final of BBC Young Musician at just seventeen.

The 22-year-old’s ability on her soprano sax to move smoothly from awesome dexterity to alluring rhapsody was evident in both her pieces as soloist in the concert programme, starting with Hector Villa-Lobos’s Fantasia for Saxophone, horns and strings, a work combining Brazilian rhythm with soulful saudade. Then in Darius Milhaud’s Scaramouche, Gillam vividly brought to life the wit and mischief of the commedia dell’arte servant character who is forever mocking authority, in its jazzy French and Latin tango and samba styles. Relentless applause brought her back to play what was an exquisite version of Duke Ellington’s In a Sentimental Mood as an encore.

Conductor Jaume Santonja Espinós introduced the evening with another composition that is strongly Latin influenced: George Gershwin’s Cuban Overture. This lively piece got the feet tapping uncontrollably to its jaunty Cuban rhythms provided potently by the orchestra’s brass and bass players. 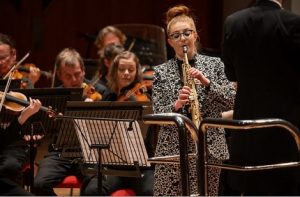 There was more of a delighted audience reaction to come with Aaron Copland’s Danzon Cubano – the composer’s personal take on Cuban dance music from his early musical discoveries as a Russian Jewish immigrant in Brooklyn.

Copland’s music also featured after the interval with a more USA-inspired work Appalachian Spring Suite. Commissioned as a ballet score, Copland went his own way to produce a sweeping work that conjured up the great outdoors with log cabins, farmsteads and misty mountains trails. It was familiar to all for its folk tune later used as the melody for the Sydney Carter hymn Lord of the Dance.

The suite was followed by an early composition by the son of a wealthy Pennsylvanian family: the First Symphony of Samuel Barber. Better known for his Adagio for Strings, the CBSO played his rarely performed one movement work with its lovely oboe solo and striking conclusion as passionately as its 25-year-old composer would have hoped for, having been clearly influenced by Sibelius’s colourful and dramatic single movement seventh symphony.

There was a special treat after the concert for fans of Argentine tango composer Astor Piazzolla, with El Ultimo Tango playing a casual gig in the neighbouring Jennifer Blackwell Performance Space, next to a well-patronised bar.

The five-strong band played several works that were part of their digital concert to celebrate the 100th anniversary of the composer’s birth earlier this year. Special applause was reserved for Jess Gillam who stepped out of the audience at one stage to play sax in Piazzolla’s most popular work Libertango, a work that ushered in nuevo tango. What could have been more apt?

The CBSO Youth Orchestra will perform Shostakovich’s 10th Symphony in Symphony Hall on Sunday, October 31st. The programme will also include Howard’s Argentum and Britten’s Diversions. For tickets call 0121 780 3333 or book online at cbso.co.uk.