An indie-rock powerhouse, Andy Bennett has had an illustrious career working with the likes of Ocean Colour Scene, Liam Gallagher, and Roy Wood. As a singer songwriter Bennett is a versatile artist with influences ranging from Robert Plant to The 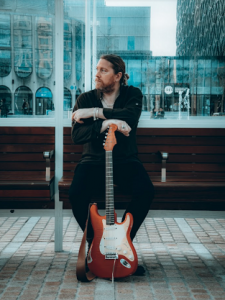 Beatles. Some of the most influential artists in Bennett’s career have been Led Zeppelin, Neil Young, Crosby Still and Nash, ELO, Jackson Brown, Pearl Jam, and Eric Clapton.

A talented musician, Andy is multi-skilled playing acoustic guitar, electric guitar, bass and drums. He is also recognised for his songwriting style once described as “musical and lyrical poetry” (Flick of the Finger, 2016).

In 2015, Andy made the decision to leave Ocean Colour Scene and focus on his solo career. His first single Hole in the Road was championed by both local and national radio stations, including BBC 6 music. This was closely followed by his second single Drift Away which again attracted great reviews and airtime on both BBC Radio 2 and BBC 6 music. Andy’s new album is complete and due for release in early 2022.

With his roots evolving from a career with the world-renowned Ocean Colour Scene, Andy has big plans for the future with his already-successful solo career. In the meantime, he will be playing a Christmas special at Holy Trinity church on Leamington Spa on 18th December. Tickets are available on 07411 428646 or here.