I’ve not been to a festival for years, but we had to do SOMETHING this summer, this one was cheap and the bands were promising so what the hell – we were double-jabbed and ready to party.

Stone Valley Midlands was held at Thoresby Park, near Newark in Nottinghamshire, which was my only gripe of the weekend. I’m in Birmingham; drive for eighty miles and I’m not still in the Midlands. That geographical quibble aside, the venue couldn’t be faulted. Parking for day visitors was a ten minute walk away, camping was right next to the site.

First up on Friday were Nancy & the Dolls, an all-female band who play punk covers and have a singer who swears a lot. The crowd loved them, though, so who was I to complain? They were followed by the Hacklers, a ska band from Ireland, then Black Country heroes the Circles, who I remember from the mod/new wave days of 1979 when their first single Opening Up was on Graduate Records with the catalogue number GRAD4. GRAD 6 was another debut, Food for Thought by UB40.

They were then, as now, the perfect band to go on before what followed, in this case From The Jam. Opening with David Watts they had the crowd dancing and singing away with all the party favourites – Tube Station, When You’re Young and a ramped-up version of That’s Entertainment as well as a few lesser-known album tracks. Bruce Foxton might have toned down the synchronised leaping but he still gets around the stage well enough. An encore of In The City and Going Underground ended the set and the crowd settled down for Friday headliners the Selecter.

Pauline Black has got a wonderful voice that sounds as good as it was forty years ago. The music was equally good and the crowd was enjoying them. But to be honest, I was tired, it was getting cold, our hotel (none of this camping stuff for me, thanks) was calling so we ducked out halfway through their set, although we still heard much of the band as we were leaving.

Saturday dawned bright and early; a bit of a satnav fail meant missing out on the earlier bands but we arrived just as Geno 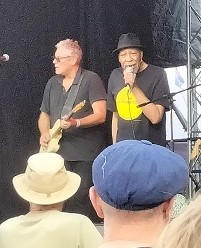 Washington took to the stage. And thank God we made it because he might be into his sixth decade of performing but Geno owned the arena from the moment he walked onstage until the final notes rang out. Foot-stomping, hand-clappin’, funky butt soul was the order of the day as the sun shone and everyone lapped up the energy of (perhaps) the last gigging sixties soul brother, calling on everything he’s learned from what must be around 5,000 live shows. He left to a standing ovation and his name being chanted by a crowd who knew they’d witnessed a living legend.

Up next were Secret Affair, who had an almost impossible job on their hands but made a worthwhile attempt, regaling the audience with their hits and a few others. They went down well and helped carry on the feelgood factor as the day warmed up both musically and meteorologically.

I’ve never particularly liked the Farm but they were one of the highlights of the festival. In Peter Hooton they had the perfect frontman, geeing up the crowd and getting the first singalong of the day with Altogether Now. Bonus points also for their cover of the Clash’s Bankrobber. They certainly outshone the Professionals, whose one-paced power pop saw much of the audience popping off for food, comfort breaks and stretching their legs. Then again, without drummer Paul Cook and his three mates from his old band none of us would have been here, so they’re allowed a pass.

The sun was shining and a cast of thousands were pretending to be seventeen again. The stage couldn’t have been set better for the Undertones, and they delivered in style. The hits were there, Here Comes the Summer was performed at thrash metal speed and Teenage Kicks greeted with a reverence worthy of the most perfect song ever written.

By now it wasn’t so much a festival as a celebration of freedom. I don’t mean that in a Laurence Fox and Piers Corbyn way, but more that the performers were pleased to be back on stage, the audience were equally happy to be out enjoying themselves and everyone behaved responsibly. There was no daft behaviour, distancing was there wherever possible and the organisers had done their best to ensure everyone’s safety. Any worries or doubts I’d had were soon blown away and I wasn’t the only one.

For Cast, see the Farm. Again, a band I’ve never been keen on delivered to a crowd who lapped up their brand of sixties-influenced nineties guitar anthems and a right place/right time frontman. Perhaps it’s a Scouse thing.

If the earlier bands had been perfect for a sunny afternoon, with the night drawing in and the temperature dropping Peter Hook & the Light were the ideal headliners. Opener Atmosphere, dedicated to Charlie Watts, set the scene. The earlier 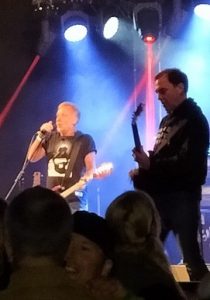 part was a selection of Joy Division classics, an audience who had been bopping away happily to a day of pleasant ditties remembering that their youth wasn’t all about girls and football. Moving seamlessly into a New Order best of, Ooky had the crowd dancing along before the inevitable Love Will Tear Us Apart brought us to a sombre yet uplifting conclusion. It had been a fantastic day but to my mind, no matter what came afterwards it still belonged to an eighty year-old American.

Sunday saw an early list of lesser-known bands; Death of Guitar Pop were the highlight with a blend of youthful exuberance and ska melodies that set the scene for the old stagers.

The Rezillos were the unlucky act chosen to fill Sunday’s ‘stretch your legs and get your dinner’ slot. They were their usual selves, full of classy three minute ditties and Fay Fife’s voice gets better with age. In an ideal world the Rezillos would be huge, but I’ll settle for being able to watch them up close and belting out those should-be classics.

If the Undertones were the band for a sunny Saturday afternoon, Bad Manners filled the spot on a chilly Sunday. You know what you’re getting with the fat man, he knows how the crowd will respond. What he also has now is a band that’s as tight as can be; the combination between Buster and musicians got the entire crowd, whether at the front of the stage or lurking in the shadows, singing and dancing along.

The departure of Bad Manners was also the sign for some of the crowd to start drifting away – not surprising as it had been a long day, an even longer weekend and the wind was getting up. But if there’s one band whose back catalogue was meant to be played in the open air, it’s Big Country. They started off well with Harvest Home, had a bit of a lull/breather for the quiet songs and their final stretch of In a Big Country, Wonderland and Fields of Fire was another hit for the Stone Valley Massed Choir.

Bruce & Jamie Watson had performed sterling work with Big Country; a quick change of clothes and they were back with 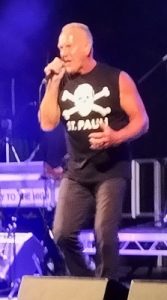 headliners the Skids. By now everyone who was going early had gone, the remaining crowd moved forward to get out of the wind and we had a final glorious hour of singing along, bad dancing courtesy of Richard Jobson, some under-rated musicianship and a last burst of nostalgic harking back to our youth from band and audience alike. We also had extreme anti-Boris Johnson comments and a final, euphoric version of the Clash’s Complete Control to round off three days of sheer enjoyment, although if that wasn’t enough, a DJ set by the legendary Don Letts brought the festival to a final end.

Ridiculously cheap tickets, good sound, friendly people and great music. Added to unobtrusive security, efficient organisation, reasonable food and drink prices plus a commonsense approach to what could be taken into the arena and you had all the ingredients for an unforgettable festival. What a way to return.