Promoting a festival is about a lot more than booking the acts and counting the money at the best of times, but this year must have been harder work than ever. You were originally scheduled for July then got put back to mid-September. With the time approaching you must be pretty busy.

“Yes, it’s full steam ahead. As we get closer to the date we’ve locked in all the artists now, it’s just a case of 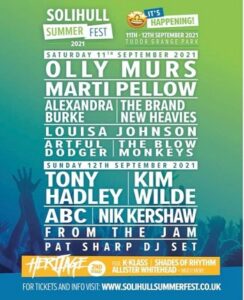 pushing forward, getting all the infrastructure into place, supporting the the marketing and having safety meetings with the council and public health.”

Last year was cancelled, this year was put back. Did you ever think it was just not going to go ahead?

“We kept the contingency date for September and in an ideal world we’d have made July happen but when the step four date was changed we were too close to the line. There was too much at risk; we wouldn’t have known until twelve days beforehand whether it was going to happen or not and by that point we’d have almost been ready to stat the build. There wasn’t any leeway so September was the way forward for us. It bought us a bit of time to get the line-up together and see where the government were in terms of public health and their requirements for the public. We were adamant that we were going to make Summer Fest happen so the September date is a blessing.”

There’s so much that the rest of us don’t think about when you’re a promoter.

“Definitely. Half of our line-up couldn’t make the new date so we’ve moved them to next year, which is good in a way because we’ve already completed our Sunday line-up for 2022. All the deposits and the finances are out, but we did have to go about completing the line-up. Sunday’s our eighties day but we wanted to create a bit of excitement for the Saturday, we pursued a few artists and we managed to secure Olly Murs as the headliners.

“We felt the public feeling of being frustrated and impatient about how everything is, with so many people having so many events to reschedule. They were very understanding in the first year but now it’s becomes tiresome so we need to get a big name in and get the excitement back, not just for us but to act as a precedent, to get the confidence back in events so people can stat looking forward to events again.”

You said that the original date wouldn’t have given much time to set the festival up. How long does it take?

“We start the Saturday before, so seven days to set up. We fence the site then get the infrastructure in, building the stage, the PA and lighting, building the VIP areas and creating the food village. It takes between five and seven days to get the site built. There’s a lot of work to get it sorted and there’s a big team working to get it all turned round in time. When the festival’s on we’ve probably got three hundred plus staff, including nearly a hundred bar staff then management, production team, security.”

You’re putting a lot of employment into an area that’s been hard hit.

“That was one of the things for this year. I don’t think for one minute that 2021 will make a profit for us, it’s about getting work for people in an industry that neds it and getting the feelgood factor back. I think it’s the first big event again locally, it’ll be quite poignant.” 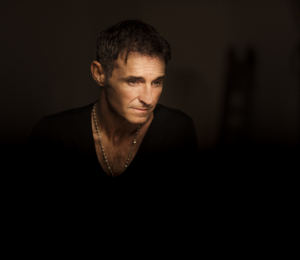 What extra changes have you made with regards to safety and welfare?

“The site is bigger, we’ve got the second stage again. We’ve got part of the pitch and putt area that was next door and we’ve moved the street food village across to a separate area with hand sanitisers and exit and entry points. We could have had a bigger capacity but we’ve set it with each person having three square metres if they want it – we’re not spacing them out but if people want space they can have it.

“There’s also a zone for people who want a bit more comfort at the back and a wellbeing area for anyone who might have a bit of a mental wobble at suddenly being in a park with a few thousand people. We’ll have Samaritans and St John’s as well as local counsellors so if anyone has one of those moments they can go and get a bit of reassurance. I felt that was really important.”

The original line-up has also changed.

“The Sunday eighties day was one of our biggest days last time with Human League and the Proclaimers and the like. The Proclaimers had been asked for a lot and we’ve maintained that feelgood feel to the day. Saturday is keeping a couple of the acts we’d already got but also bringing in some younger names. It’s given us a chance to see how a major headliner works and it it woks it’s something we’ll pursue for future years.”

Then there’s the weather. It was sunny and dry for the original weekend. You must have been crying.

“Looking at the historical weather for September it’s usually good. We’ll also get the benefit of more bands playing when it’s dark to get the light shows. There’s a lot happening around that time, but you really can’t go much past the end of September because then the weather gets too cold. There’s so many events moved we’ve found that things like the fencing contractors, the toilet suppliers, everyone like that has to be new.”

One advantage to the line-up is that you shouldn’t have any problems with artistic temperament. These are acts that will turn up and put on a show.

“They know each other, they’re a pleasure to work with. They’re great live.”