Business leaders and trades unionists have passed comment on the city’s Clean Air Zone, after it was revealed that the scheme, due to come into effect on Tuesday 1st June, will have a two-week settling-in period before the charge will be imposed.

Perry Barr MP Khalid Mahmood said on the West Midlands BBC Politics programme of 16th May that the Zone was a “tax on the poor”.

Ian Scott, president of the Birmingham Trade Union Council, claimed that the £8 a day charge will be a major burden on many parts of the community. 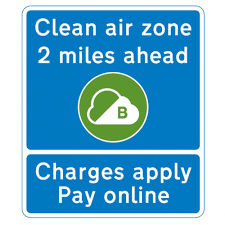 While accepting the need to reduce air pollution in the city, Mr Scott called on the city council to investigate developing an alternative green transport infrastructure such as in the Belgian city of Ghent, a Belgium City, which enjoys a free bus service in the Clean Air Zone and free car parks outside the Zone.

Meanwhile, the Westside BID group has expressed its support for the delay in new charges. The BID had previously told the council that an immediate introduction this was far too early for city centre businesses, many of whom are in the hospitality sector and are only just emerging from COVID-19 restrictions.

Following the announcement from Cllr Waseem Zaffar, Birmingham’s cabinet member for transport and environment, that there will be a two-week delay in applying the Clean Air Zone charges, Mike Olley, general manager of Westside BID, said: “This is great news, and shows that the council is listening to the concerns that we as a BID had on behalf of our members.

“Businesses on Westside, largely in the hospitality sector, were only just emerging from lockdown, and they needed more time to understand and get ready for CAZ charges.

“This includes finding affordable ways for their staff to get to town, arranging for their supplies to be delivered economically, and making sure their customers clearly understand the changes.”

Mr Olley added: “If possible, we’d like a month or even longer for business to get ready, but another two weeks is a good start in the right direction.”

Cllr Zaffar said: “We always want to give communities that extra time to be able to adjust to such a difficult and challenging project that this Clean Air Zone clearly is.

“So for the next two weeks we won’t be seeking any payment or enforcement of those payments either.”

He added that there were hundreds of people in the city who could still benefit from grants and exemptions available and urged them to apply, “We’re not interested in taking their money, we want green compliant vehicles coming into our city centre.”

The decision will mean high-polluting cars, which face a daily fee of £8 to travel into the centre of the city, and coaches and lorries, which will be charged £50, will not be required to pay for journeys before 14th June.