Andy Munro has a few words on the subject of Blues’ new kit.

The new Blues home kit has just been released and most of it represents a big improvement on last yea. But will it please the traditionalists? 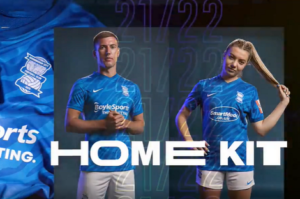 The white sleeves from last season have thankfully gone and the only concession on the shirt to a white design is a seam down the sides, which is actually a nice touch. The top is patterned and has a seemingly neat but tight v neck, described by Nike in fashion speak as an “overlap v neck” I’m not sure what this means as the only overlap gear I’ve ever seen down the Blues was the well padded ex-Evertonian Billy Wright wearing a tight pair of shorts.

Most of the material is recycled, which is good news environmentally although Nike appear to have cocked up the early sizing, described as an unintentional(!) error. One would hope it was.

Shorts are traditional white, which most will welcome although I personally still hanker after the all-blue kit as donned years ago by talents such as Barry Bridges and Fred Pickering.

One final footnote is that the PR picture also shows a woman player donning the outfit while unnecessarily and perhaps provocatively extending her long locks. This may have both the PC and the definitely non-PC brigade hot under the collar, for entirely different reasons.