Cinema ready to welcome back customers.

After fourteen months of darkness since Wolverhampton’s iconic Light House cinema closed its doors to audiences, and with restrictions on indoor gatherings lifting this month, the venue is excited to announce it’s reopening on Friday 11th June, screening two award-winning films – Sound of Metal and Nomadland.

Staff have been working to ensure the venue, in the city centre’s landmark Chubb Buildings, has COVID safety protocols in place, thanks largely to a successful crowdfunding campaign launched at the beginning of the pandemic and a safety grant from the BFI. 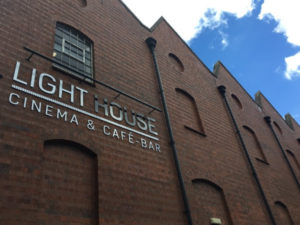 The cinema has an award-winning line up of films scheduled ready for audiences who have craved the big screen during lockdown, including Oscar winners The Father, Minari, and Judas and the Black Messiah as well as a high quality slate of other titles like Ammonite, Dream Horse, First Cow, Limbo, Another Round and Peter Rabbit 2. Bosses are also planning for the return of the theatre, opera and ballet screenings that were popular with audiences before the shutdown.

Later in the year will see the release of the much anticipated James Bond film – No Time To Die – which was originally due to have a special preview screening at Light House at the beginning of April last year, as well as blockbusters Top Gun 2, Steven Spielberg’s re-make of West Side Story, and Downton Abbey 2.

Light House CEO Kelly Jeffs said ahead of the reopening: “When we closed the doors to Light House back in March 2020, we had no idea it would be over a year before we would be seeing audiences here again. We can’t wait to welcome everybody back and have been preparing to make Light House as safe as possible while still keeping that special cinema atmosphere that people have been missing.

“Helping our local communities to recover and continue to play an important part in Wolverhampton’s cultural offer is absolutely critical and we’ll be ready with our warm welcome. We look forward to offering a programme of fantastic screenings including several award winners, but also those independent films telling important stories that people might have missed. Our opening programme is still being finalised but will be posted on our website shortly.”

For the latest updates visit light-house.co.uk.