Work begins on biggest ambulance hub of its kind.

Leading property developer Stoford is delivering the 76,000 sq ft purpose-built hub, the largest hub of its kind in the country, which will eventually house about 350 operational ambulance staff working 24 hours a day.

Contractor McClaren Construction is now on the seven-acre site in Shidas Lane, Oldbury, and aims to complete the hub, which will also include a facility for the Hazardous Area Response Team, fleet maintenance and vehicle preparation areas, the Trust’s Education and Training Academy and central stores, next spring. 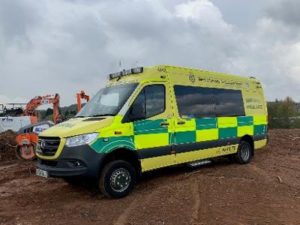 It will be open in time for the Birmingham Commonwealth Games, which kicks off in July 2022, and will be used as a staging point for the Trust’s preparations for one of the world’s biggest sporting events.

Craig Cooke, WMAS Director of Strategic Operations, added: “This is an important hub for the Service not just for the Commonwealth Games but for our ongoing ability to deliver high quality care to the people of Birmingham and the Black Country.

“It will also see a major upgrade in our central stores facility, which has played such a vital role during the pandemic, but also a big step forward in facilities for our Education & Training team and the Hazardous Area Response Team.

“Talking to staff, they are excited to see the new building developed and we will be working with them to ensure it fully meets their needs.”

Tony Nash, Director at Stoford Developments, said: “This is a significant development for West Midlands Ambulance Service and an important national infrastructure project, so we’re pleased to have made a start on delivering the scheme, just a short time after we received planning approval.

“As a former quarry site that was undeveloped for fifteen years, it is a technically challenging building project, so receiving financial support from the West Midlands Combined Authority to make it viable has been crucial in getting it ready for development.”

The development is the first of its kind for funding partner Assura, as it continues to expand the range of local healthcare infrastructure it supports for primary care networks and NHS Trusts.

Jonathan Murphy, Assura CEO, said: “This hub will provide a much-needed new base for emergency health services in the West Midlands. We are particularly proud to be playing our part in such an important piece of the health infrastructure that will sit around the Commonwealth Games, at a time when the eyes of the world will be on the region.”

WMAS serves a population of 5.6 million people and covers an area of more than 5,000 square miles, comprising Shropshire, Herefordshire, Worcestershire, Staffordshire, Warwickshire, and the West Midlands.

The hub will achieve the BREEAM Excellence rating and will accommodate 365 parking spaces, including ten disabled spaces and 70 ambulance spaces.