The Digbeth Estate is set to re-launch The Bond on Fazeley Street, Digbeth, as a home for the best creative talent in the West Midlands.

Oval, working with Greater Birmingham and Solihull Local Enterprise Partnership and Create Central, has partnered with some of Birmingham’s best designers and architects to reimagine The Bond for the next generation. The rebuilding of the Bond will see it become a focal point for television, film and all digital content production.

Sitting at the junction of the River Rea and the Grand Union Canal, with its own wharf, The Bond has been reimagined from its industrial origins as an Ice Factory, the HP Sauce Factory for Birmingham and a Bonded Warehouse before spending thirty years derelict. The Bond’s relaunch is a landmark scheme which harnesses the embodied carbon of the older building whilst introducing modern technology. 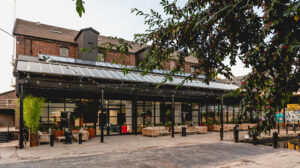 Digbeth, the city’s Creative Quarter, is a cradle for businesses of all sizes, from thriving independents to internationals. The BBC is set to open its new broadcast centre in the area in 2026, a move which will also see MasterChef set up home in Digbeth in 2024. Steven Knight’s proposed film studio and HS2 will also be joining Digbeth soon.

At its core, The Bond’s purpose is to re-establish itself, Digbeth and Birmingham as the epicentre of screen and digital talent in the Midlands; acting as a home for native creatives and a magnet for incomers.

Oval has been investing and developing buildings in Birmingham for over 20 years and has partnered with influential industry body Create Central and GBSLEP to bring The Bond back to life.

The Bond will also be available for event hire, offering state of the art spaces suitable for a variety of events ranging from screenings, conferences, film shoots and award ceremonies.

Further information about The Bond’s spaces can be found here.