Multi award-winning livewire Kane – who has appeared on a whole host of TV shows including the likes of Live At The Apollo – will top the bill for Live At The Town Hall on Saturday September 25th.

It will be the first time since the start of March last year that promoters Funny Beeseness will have put on a show at the Upper Clifton Road venue, when Paul Sinha appeared just before the coronavirus pandemic hit. 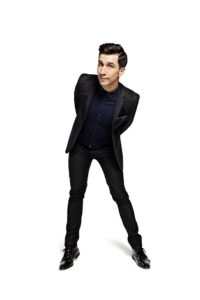 Kane will be supported on the night by Oldbury lad Darren Harriott, who is himself making waves with a number of TV appearances, and Black Country musical comic Jonny Cole. Funny Beeseness supremo Wayne Beese will resume hosting duties in the MC role.

Tickets are now on sale and will be expected to go quickly.

Beese, from Dudley, said: “We’re absolutely delighted to be returning to the town hall in Sutton for live comedy.

“It’s an incredible venue and we had already had the likes of James Acaster, Omid Djalili, Jonathan Pie, Tom Stade and the Sinnerman there before Covid intervened.

“It’s been a long time since we’ve been able to put a show on there now so we wanted to come back with a bang and with an incredible line-up, and we think we’ve done that.

“Russell is genuinely one of the best live acts out there, and we’re delighted to have him make his Funny Beeseness debut. To have Darren, whose star is rising by the minute and who appears to be on the telly in everything at the moment, and Jonny, who is one of our most popular and requested acts, makes two big cherries on top of an already delicious cake.

“It’s a fantastic show in prospect and tickets are already flying out, so we would urge people to get booked up quickly and come and join us for the return of live comedy to the town hall in September.”

To book, go to funnybeeseness.co.uk .