Sandwell’s Birchley junction is set to benefit from £24 million of improvements as part of the Government’s commitment to levelling up transport infrastructure across the country, Transport Secretary Grant Shapps announced today.

Birchley Island lies at the intersection of the M5, A4123 and A4034 in Oldbury, serving as a key intersection connecting parts of the West Midlands and the southern part of the Black Country to the national motorway network.

The proposed upgrades will provide faster and more reliable journeys for millions of people travelling into and out of the southern part of the Black Country, whilst offering greater connectivity between the key economic hubs of the West Midlands 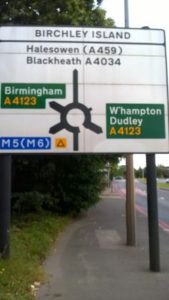 and beyond, improving people’s access to job opportunities in areas such as West Bromwich, Dudley and Oldbury.

Transport Secretary Grant Shapps, said: “This funding package will go towards vital improvements to Birchley Junction, helping to boost connectivity for motorists and the economic recovery in the Midlands. This will not only reduce congestion and improve journey times for all road users, but will also provide greater access to employment opportunities as we build back better from the pandemic and level up the transport landscape across the country.”
st Midlands and the Black Country, and have a huge positive impact on their day to day lives.”

Andy Street, the Mayor of the West Midlands, said: “During my time as Mayor we have made huge investments and improvements in the public transport network in the West Midlands, but some car journeys remain essential and so it is critical that we also continue to invest in and improve our highways.

“Birchley Island has been notorious with Black Country residents for years due to the amount of congestion that builds up, and so I am delighted to have helped secure the funding we need from Government to finally give the roundabout a major overhaul.

“From widening carriageways to increase capacity, to additional lanes to tackle congestion, these works will make a real difference to every driver who has had to endure the misery of being stuck in and around Birchley Island.”

Planned works, set to begin subject to final legal clearances, involve widening the existing carriageway on the roundabout to increase capacity. Additional lanes will also be added to the junction to further reduce congestion, while facilities for pedestrians and cyclists will be enhanced in a bid to promote greener travel options for people travelling in the region.

The overall cost of the scheme is £30.1 million, with Sandwell Metropolitan Borough Council contributing the remaining £5.7 million. Council deputy leader Cllr Maria Crompton, said: “This is fantastic news for Sandwell, the Black Country and the wider West Midlands. These improvements are very much needed not only for Sandwell residents but for our local and regional businesses who use this junction on a daily basis.

“There are big plans for the future in Sandwell, we want Sandwell to be a key player in the strengthening of the local economy aligning with the ambitions of the Black Country and the wider West Midlands.”

Councillor Jackie Taylor, Cabinet Member for Sustainable Transport, said: “We are thrilled to get this funding. Birchley Island is a major gateway for the entire region with millions of vehicles passing through each year. The new design will improve air quality and make the junction much easier for those who cycle or walk.”

The Birchley Island improvements represent continued Department for Transport investment in the Midlands as part of efforts to support local economic recovery following the pandemic. The Department recently announced £29 million from the Transforming Cities Fund to revolutionise Stoke-On-Trent’s transport network, with the aim of improving productivity and spreading prosperity in the region through investment in public and sustainable transport.