Dave Woodhall watches Villa beat Newcastle without having to try too hard.

There’s always points to prove when your previous manager returns, and with Steve Bruce coming in for criticism from Newcastle supporters in much the same way as he did at the end of his time with Villa, there were also a few crossed fingers and hoes that fate wouldn’t be tempted ahead of what should have been the start of an easier run of fixtures.

Dean Smith was banned from the dugout for this match, and he was also apparently banned from shouting down to his coaching staff, a penalty almost as ludicrous as the offence it was imposed for. Also banned was John McGinn, which gave Marvelous Nakamba the opportunity to show whether he’s improved as much this season as some of his fellows in the Class of 2019.

Nakamba had a good start to last season but faded as the year wore on, much like the rest of the team did. The question could still be posed, because a defensive midfielder in this game didn’t have to do all that much, although he did well in what he 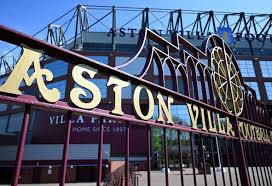 had to do. Villa have put in some totally magnificent performances already, probably as many as in the past six or seven Premier League seasons put together, but there’s rarely been one as effortless as this.

You could say that the sign of a good side is whether they can win without breaking sweat; we’ve seen it often enough against us so it’s great to enjoy a game knowing that it’s over by half-time and you can use the second forty-five as a training exercise.

That was helped by an early goal and it was equally good to see it scored by Ollie Watkins, a player who always knowns where the goals are, even though he knows better where the VAR cameras are located. With Nakamba scarcely putting a foot wrong and Ezri Konsa invoking the Spirit of McGrath in looking as though he could play the opposition on his own, Douglas Luiz was able to get further forward and help over-run the visiting midfield – again, something we’re used to in reverse when watching the Villa.

Watkins should have had a second, but yet again had his strike disallowed, with the flag going up way, way after the ball crossed the line and any infringement might have taken place – another small step in the erosion of football as a live spectator sport. He could also have had a penalty, but as we get told often enough Villa shouldn’t be in the Premier League Hawkeye Sheffield United so we should just shut up and accept every decision that goes against us without complaint.

Anyway, four minutes before the break Villa have a corner, it isn’t cleared properly and Jack Grealish lays on the opportunity for Bertrand Traore to hit the second from the edge of the box, his fourth in the past six games and this from a player who was expected to take his time settling in. There were some chances missed in the second half, which is annoying, but Villa were never threatened and always seemed capable of stepping up a gear or two in the unlikely event of Newcastle getting a goal back.

Substitutions were made to rest those going off and give a run-out to their replacements rather than because they were forced, which is another sign of progress. All in all a good night, with Villa showing the confidence that comes from everyone knowing what they have to do and also being certain that everyone around them can do their job equally well. And how long is it since we could say that?

Finally, and while I hate to kick a man when he’s down, “You have to question Bruce’s tactics,” Chris Waddle said after the game. It’s not the first time that’s been heard at Villa Park.