Simon Hales listens in on the latest CBSO Online.

As a composer who could barely hear some of his greatest hits, Beethoven would have given a classical thumbs-up to the CBSO’s latest orchestral offering.

Making the best of the limitations imposed by the pandemic, a team of CBSO players celebrated Ludwig’s 250th birthday and his music with a chamber concert under the title of Beethoven: 250 Years Young – minus a live audience. 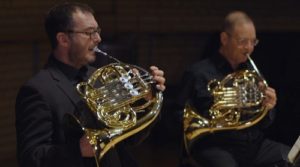 17th – the concert saw the ensemble of string and horn players perform two of the master’s rarely performed youthful works.

Beethoven’s only string quintet, nicknamed ‘The Storm’, was inspired by the great quintets of his early hero Mozart and was a future inspiration for Schubert.

It was given an energetic rendering in a socially distanced but musically close collaboration by two violinists, two viola players and two cellists.

Fortunately, the mic stand was no longer in view for Beethoven’s Horn Sextet in E Flat: a work with an Opus number of 81b but written as a 25-year-old in 1795. The work just remained unpublished until 1810. The composition for two horns and a string quartet was performed with panache – and sounded, in every note, the light-hearted entertainment that it was intended to be.

The virtuoso horn playing made you think of forests and hunting parties, with the weaving of a simple melody between the instruments particularly satisfying on the ear.

Sandwiched between the Beethoven was a modern work, 180 Beats per Minute, by Jörg Widmann that was as pulsating as its title.
All rhythmic drive with one heartbeat-skipping surprise, this was six minutes of sheer excitement from a young composer who was recently a CBSO Artist in Residence.

A beautiful and joyous antidote to our times, the CBSO’s Beethoven: 250 Years Young concert is available to view online until Friday, January 15th, priced at £5 per person.