Sir Howie K. Elston, our reporter at large, sits down with Mister Veep. 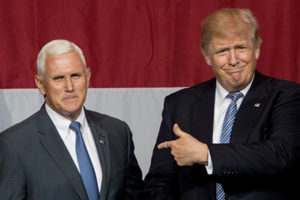 I was supposed to meet with The Other Guy (writes Sir Howie). But Señor Trump has gone walkies, so at the last minute, a firm hand shoves Vice President Mike Pence (left of frame, above) in front of the camera for my 1-2-1. I ask him the vital questions of the day:

MP: The pared down fashion of a depute commodore of a provincial yacht club…

MP: A vapid smile to cloak a brain cleared of thought

SHE: Which brings me to the post election crisis

MP: But we won. There is no crisis (rustles through papers frantically)..it says here. No crisis. We won

SHE: Your boss melting down, ignoring democracy and lying through his teeth

MP (rustles papers) We are facing dark forces. So, we’re taking measures to make Indiana and America  great again.. . And acting fast too.

MP: Not getting ready, Howard. Already underway. (The VP straightens his suit and departs and there is a bolt of electric uncertainty in the US of A)

3 thoughts on “The Dickhead Tapes: Pence and nonsense”