Birmingham hospitality chiefs have slammed the government’s placing of the entire West Midlands into Tier 3 with one describing it as “lunacy”.

Mike Olley, general manager of Westside Business Improvement District in Birmingham, said the new restrictions would be a death blow to many businesses is what he said was “one of the most and best-regulated industries in the UK”.

But he said the policy reflected prime minister Boris Johnson’s experiences of “buffoonery” as a member of the Bullingdon Club, the private, all-male dining club for wealthy Oxford University students.

Mr Olley (pictured) said: “It’s that club’s wanton vandalism of restaurants and student accommodation that characterises Mr Johnson’s understanding of how people go out to enjoy themselves. 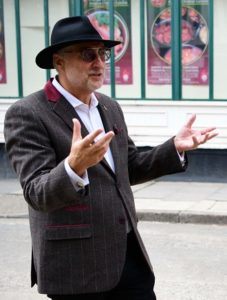 “His lively memories of youthful buffoonery is his only guide and explains why he is comfortable to close the nation’s hospitality sector. In short, the prime minister has never really trusted himself, and so doesn’t trust us to be sensible and feels we will spread disease, death and thus disaster.”

Mr Olley, who has led the the so-called ‘golden mile’ of Broad Street for more than fiften years, explained that bosses and managers in the hospitality sector take their health and safety role very seriously.

He said: “Their COVID-19 track record is amongst one of the best of almost any industry in the UK, with deaths from infections picked up at hospitality venues around 2.5% to 3%, whereas schools, colleges and universities make up about 30%.

“And yet those overwhelmingly state-sponsored and supported educational establishments get to stay open, while the largely privately supported and funded hospitality sector gets closed down. This is complete madness.”

Mr Olley went on to make a personal plea to the prime minister: “When you are devising policy that ruins businesses, forcing them to collapse and never get up again, please don’t judge the hospitality sector based on your own misdemeanours.

“Instead, Mr Johnson, please consider that there are hundreds of thousands of normal folk who provide their honest trade on modest incomes as cleaners, bar staff, waiters, chefs and doormen in the hospitality sector.

“And focus on the fact that your prejudiced safety tiering will result in them all facing redundancy and being thrust on the mercy of the state’s meagre handouts.”

Mr Olley also questioned the metrics that the government has used to justify which tier cities and regions are placed in, and whether the “failed tier system” should even be used again.

He added: “Einstein suggested that doing the same thing over and over again and expecting a different result is madness. Well, the prime minister appears set on that course.”

Meanwhile Julia Robinson, manager of the Southside District which includes Hurst Street and the Gay Village, added: “We’re devastated with today’s news that Birmingham has been moved into Tier 3 restrictions. Many of our hospitality businesses that have already been hit incredibly hard, will simply no longer be able to operate. This move puts the future of our iconic venues in jeopardy unless there is clear support from the government to get them through the next few months. Many of the businesses in our district are independents so this could prove to have an irreversible effect on the area, if they aren’t protected.

“For this announcement to come now, at such a crucial trading period, when so many have invested heavily in making their operations Covid-secure, is yet another blow to an already fragile sector.”