Protestors are visiting woodlands in Staffordshire every day to witness what’s happening to the trees and wildlife during work taking place in preparation for the laying of the HS2 line. They found many badger setts at Black Slough near Lichfield that have been blocked off by HS2, harming the animals who could otherwise use the same sett for decades.

When published into the protestors’ Facebook group, images of the blocked badger setts have elicited many angry reactions: “HS2 are involved in a war against nature as much as building a bloody unwanted train,” was just one of the comments posted. 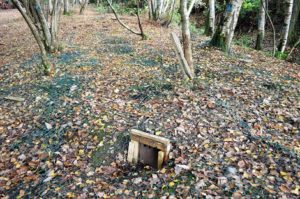 Badgers are known to fight for their territory and can’t be moved elsewhere. HS2 is a death sentence for them, as it is for the trees and many living species of the woodland. Even the promise of translocating the soil is an empty one.

Mary, a local tree protector, explained what is translocation: “Translocation is clearly nonsense because an ancient woodland built up over thousands of years. And that soil is a complex interaction of all sorts of microorganisms, plants, roots and tree roots.

“The best way I can explain this to you is that if you had a beautiful birthday cake with marzipan, and icing, and your name on top, and candles, and I put it through a blender, turn it on with the cake in it, and then give the cake back to you. There you are, that’s your birthday cake! In fact, that’s kind of true because all the elements of a birthday cake are there. But it’s no longer a great birthday cake, it’s a mess and you won’t be able to eat that. It’s the same with an ancient woodland. If you scoop it all up, tip it in a trailer and tip it up somewhere else, yes you moved it, but it’s not the same thing anymore.”

A Halloween themed protest is planned on Saturday 31st October from 10 AM at Fradley Junction. Protestors will meet in a COVID-safe manner, then intend to walk alongside the canal path to show local residents where trees will be cut down over the coming weeks.