RAAH. Fest will be streamed online on 26th September and aims to raise £1 million for twenty UK charities and social enterprises that support human rights and social justice.

The eight-hour festival will feature performances from thirty artists, including Inoxia, Poppy Ajudha and Gabrielle Aplin.
It will include documentaries and personal stories from people who have experienced migration and displacement, human trafficking, racial discrimination or other injustices.

Having recently been made redundant from her supermarket job Jasminder, from Birmingham, dedicated her time in lockdown to organising the event, which has attracted over eighty volunteers and is expected to be viewed by more than 200,000 people on the day.

Jasminder said: “I first thought about launching a festival after seeing many of my friends experience first-hand the issues the festival is raising awareness of. I was tired of seeing friends go through the trauma of being deported or being detained unfairly, I’d had enough and decided to do something about it by setting up RAAH. Fest.”

She added: “I’ve been a carer, cleaner, shelf stacker, youth worker, but this is the first major event I’ve organised! I started by asking everyone I know to volunteer and lots of people signed up, including many of my friends in Birmingham. Then it snowballed, and we now have over eighty people helping out with everything from press to social media to finding performers, all across the UK and Europe.”

Jasminder has teamed up with fellow Birmingham residents, including fashion designer Lawrence Gonzales (pictured), 25, who has designed the merchandise for the festival, as well as working as a designer for Emporio Armani and his own label Akonomy. 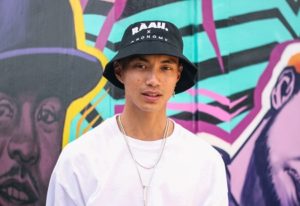 Lawrence commented, “RAAH. Fest merchandise is a great way to raise funds for the chosen charities and it’ll also help RAAH become a physical movement that everyone can take with them for the rest of their lives – we’re raising consciousness through fashion.”

RAAH. Fest is unique in that it’s organised solely by volunteers, many of whom have been affected directly by the issues the festival aims to raise awareness of and funds for.

Girl Dreamer, one of the charities supported by the event, supports women of colour to live their best lives through providing platforms for empowerment. A representative for the charity commented, “We wholeheartedly support RAAH and it’s mission as we believe the ambitious team are well placed, have the experience and vision to truly create some big and much needed change in our world!”

Jasminder hopes that the festival will become an annual event and plans to create a new charity, RAAH, to support human rights and social justice issues throughout the year.

Publicity for the build-up to the event includes a socially distanced bike ride from London to Sheffield taking place from 18th-23rd September 2020, including a stop off in Birmingham on 20th September. You can find more details here.