Following the incidents in Birmingham city centre overnight, a charity involved in assisting victims of crime has advised of help available for anyone who was affected by the series of stabbings, which left one man dead and several people injured.

Diana Fawcett, Chief Executive of the independent charity Victim Support said: “Our thoughts are with everyone affected by the major incident in Birmingham, including those who have lost a loved one. We know that experiencing or witnessing traumatic incident like this can have a significant impact on your mental health and wellbeing, regardless of whether or not you have been physically injured.

“That is why we are urging anyone who has been impacted to get in touch with us for specialist support and advice. Call our free and confidential 24/7 Supportline on 08 08 16 89 111 or start a live chat at victimsupport.org.uk/live-chat.”

West Midlands Police have called for anyone who witnessed anything or who has any CCTV or mobile phone footage of the area during the time when the stabbings occured to contact them.

Chief Superintendent Steve Graham (pictured), responsible for policing in Birmingham, said: “Please be assured that we are doing absolutely everything we can to find whoever was responsible and try to understand what exactly happened. We have 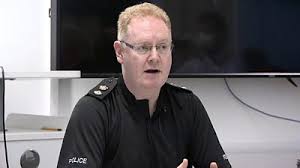 well-rehearsed plans for dealing with major incidents. Your safety is always our priority and that’s why you’ll see an increase in officers on the streets.

“In the meantime, we’d ask anyone who’s in the city to remain vigilant and report anything suspicious to us.”

Meanwhile, West Midlands Ambulance Service has commented on the attacks and paid tribute to staff, some of them volunteers, who helped the injured.

The service received multiple calls to three locations over a period of an hour and twenty minutes. The initial call was to the junction of Colmore Row/Livery Street at 12.40am, with further incident sites at Irving Street at 1.52am and Hurst Street at 2.00am.

A total of fourteen ambulances were sent to the scene along with eleven paramedic officers, the Hazardous Area Response Team, four critical care teams with doctors and critical care paramedics. A team of St John Ambulance volunteers at the SafeSpace project at the Arcadian were also involved in treating casualties and conveyed one of the patients.

Five patients were taken to the major trauma centre at Queen Elizabeth Hospital Birmingham. Three had suffered critical injuries and sadly, a man died shortly after arrival. Two further patients with non life-threatening injuries were also taken to Heartlands Hospital for treatment while an eighth patient with minor injuries did not receive ambulance treatment.

The Trust went to major incident standby with further ambulances sent to standby in the area should then have been needed. Senior officers including the Chief Executive also attended Trust Headquarters to co-ordinate the Trust response.

Assistant Chief Ambulance Officer, Nathan Hudson, said: “This was clearly a very serious situation with a large number of patients, some with very serious injuries. My thoughts are with the families of those hurt, particularly of the man who tragically lost his life.

“I must pay tribute to the ambulance staff who worked so hard at the scene and en-route to hospital, to help each of the patients hurt. We train for incidents like this on a regular basis which meant that we were able to get a large number of ambulance resources into the scene very rapidly so that patients got the care they needed as quickly as possible.”