The Department of Work and Pensions secured a ten-year lease on the B1 building in Birmingham’s Jewellery Quarter – a standout deal in light of COVID-19.

Avison Young’s latest analysis reveals a significant drop in take-up and demand across the Big Nine regional office markets (Birmingham, Bristol, Cardiff, Edinburgh, Glasgow, Leeds, Liverpool, Manchester and Newcastle). The B1 deal formed a large part of the 61,500 sq ft of total take-up in Birmingham city centre during Q2 – building, however, on a strong Q1 to take the half-year total to 400,000 sq ft.

The second largest deal to take place in the city in Q2 also went to the UK Government, with 5,249 sq ft at Edward House, Quay Place, taken by the Ministry of Justice – in line with a quarter where the public sector accounted for a fifth of all take-up in regional markets.

Despite the reduction in activity resulting from difficulties conducting viewings and occupiers reassessing requirements, Avison Young’s analysis predicts office deals will now steadily increase in Birmingham – with September set to see a step change in transactions.

Carl Potter, Managing Director of Avison Young Birmingham’s office (pictured), said: “The B1 deal is a significant one 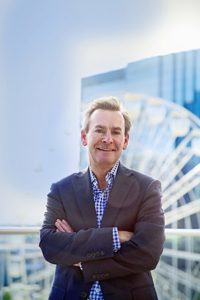 for the Birmingham office sector, proving that activity has understandably slowed but not come to a standstill – far from it. As the current climate sees occupiers’ priorities shifting towards cost reductions and COVID-19 compliancy, the versatility of space available in the city and a high volume of deals at the start of the year leaves the market in a stable position.

“We can expect this resilience to be demonstrated through activity picking up in the coming months – with key completions at Paradise and Arena Central driving a still evolving and exciting city centre office landscape.”

Construction has also resumed on all three major sites in the city centre. The pre-let 240,000 sq ft Three Arena Central is expected to complete this year, and two speculative buildings – 228,000 sq ft 103 Colmore Row and 280,000 sq ft 1 Centenary Way, Paradise – are due for completion in 2021 and 2022 respectively.

Charles Toogood, Avison Young’s Principal and Managing Director, National Offices, comments: “This is a challenging time for all office markets and Birmingham is no exception – with activity subdued both in the city centre and out of town, driven by uncertainty over future requirements and many looking to review their options to suit a new working world.

“However, many deals and requirements in the city centre will now resume as businesses implement their back to work strategies and re-assess the landscape. Strong public sector deals such as the B1 letting, which Avison Young helped advise on, have provided a steady source of activity and stand out as successes for the city centre office market as it weathers the storm.”

Neil Rami, Chief Executive of the West Midlands Growth Company – the region’s official inward investment agency – said: “These are encouraging results at such a crucial time in the region’s recovery from the COVID-19 pandemic. This deal is not only significant for its size, but also for the fact that it has come from a major central Government department, which demonstrates real confidence in what the West Midlands has to offer to both the public and private sectors.

“With construction activity in the region starting to resume and many employers beginning phased returns to their offices, our focus is to continue working with our partners in the property sector to stimulate momentum and showcase the unique and emerging opportunities we have – such as those around the 2022 Commonwealth Games – that will ultimately help the West Midlands to bounce back strongly.”