Richard Lutz roams through another week of lockdown. 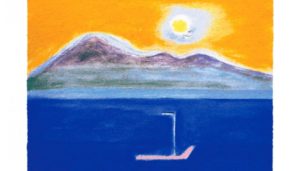 Now, here’s a nice picture of a little boat chugging up past an island called Arran with its big Scottish mountains looming over a sea shaded with a palette of blues. It’s by the painter Craigie Aitchison. And though there may not be too many pink craft on the rumbly Clyde coast and though there may be a shortage of days with a dry desert sun glaring in the western sky, it does the scene justice.

I should know. It’s my view every day when I throw open the curtains. A view, of course, obscured by eleven road signs: signs that tell me not to enter, not to exit, go one way, go the other way and one on a curve to tell people there’s a curve in the road.

Here below, a photograph of the same sea taken this last week. It could have been by Aitchison: 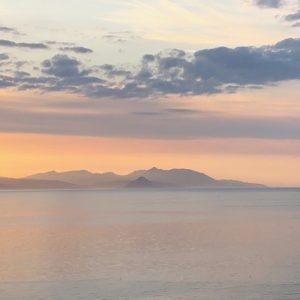 The sky is salmon, the waters a faint greyish blue tinted with rose. The waters are pellucid, a painterly word relating to translucency. Call it what you will, I’ll bet you a bunch of bagels that you get these evenings when Aitchison’s Arran oversees pink evening waters.

This stretch of Britain, somewhere south of Glasgow and north of Somewhere Else, transforms colours faster than a snap of a finger. Today Andy P is looking at this view. He and his wife Ellen are in their eighties. He’s under lockdown like the rest of us and, like many, getting clear hard instructions from a concerned family.

“We are coming to realise,” he says, “that this virus has screwed up the final decade of our lives”. He’s looking over the waters as painted and photographed above and doesn’t make a big deal about his point of view. It’s just how he sees things.

As I chat with Andy and Ellen, there’s been a constant whirr as I take a break with the covid deliveries to the old and vulnerable in the village of Strathcarrick. The hard whine suddenly stops and I see Eddie with his big trimmer under a monstrous hedge. It’s a big job. For some reason, this is the year of the hedge. They’re growing out of control.

Eddie tells me about his little girls, itching to get out of the house. “They miss the school, especially the wee one. It’s the best time of their lives and they don’t even know it. But they kind of know they’d be happier off in the schoolyard.” His daughters are Kylie and Kyra. A son is on the way. Kenny? Kieran? Kyle? No, says Eddie, it’ll be David. “It’s a nice name. We like it.”

There’s a ding on my phone. A text includes a link to archive of Old Stratchcarrick. It’s voiced by vintage voices, voices salted and peppered by age and the sea. It’s seventeen minutes of Yesterday Gone wrapped forever in unknowable digital wiring. It’ll be watched hundreds, maybe thousands, of times in the village. Someone says it’s Uncle Andy’s voice on some of the footage…Andy who died two years ago, well into his nineties and who worked as a fisherman for many decades. Others say it’s the voice of Jim McC. “He had a whistle when he spoke.” Kathy explained. “That’s Jim. He had dentures”.

3 thoughts on “Covid Chronicles: North of Somewhere Else”