Dave Woodhall on how Villa can make a go of Project Restart.

Preparations are well underway for the re-start of the Premier League season, in whatever form it’s going to take. The police and licensing authorities are coming round to the idea that neutral venues might not have to be used after all and a few friendlies are taking place. More on them later.

We’re still going to be left with a situation that will be radically different to the games already played. Five substitutions, no VAR, empty grounds and the latest novelty, the idea that taped crowd noise might somehow improve the 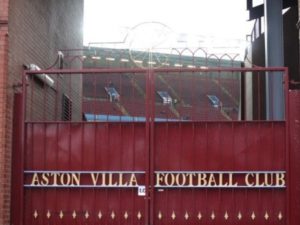 viewing experience for the TV audience who are, as we all know, the only reason why the season is starting up again.

Television rules supreme where top-flight football is concerned, but at least this latest development is a tacit admission that no matter how much money they might throw at the game, they still can’t do without those of us who turn up in person. That’s a lesson we ought to learn from; when football returns to normal we could use this to our advantage if only we could work together for a change.

The top of the league is sewn up, but whatever happens elsewhere will be a bit of a farce. There are always some easy fixtures towards the end of the season as clubs reach mid-table safety (you’ll have to take my word on that one, it’s been so long since it happened to us) but this time round there promises to be a record number of meaningless kickabouts.

I wonder how many players are going to want to give their all on a boiling hot afternoon in July when they’ve got another end of season game three days later, and that’s without thinking of the implications of a second spike or a team picking up a couple of new cases along the way. Whatever happens, the season will end with different rules and a different emphasis to how it began. It’s not fair, but fairness comes a long way down the list of priorities in football and we have to make the best of the situation.

Villa have played a few warm-up games in an attempt to get into something like match fitness ready for next week’s return against Sheffield United. A 2-2 draw at home to Albion on Saturday meant we’re going to be struggling, a 1-0 defeat to Leicester on Wednesday means relegation is virtually certain, while a 3-0 win against the same opposition at something called the King Power stadium is incontrovertable evidence that the run-in will be a breeze and safety is assured.

Of course, with nobody else in attendance we’ve only got the word of the clubs that these results are correct, or even that the games took place at all. And there’s an idea.

Our owners are richer than most and it seems that everyone in football has their price. All it needs is a few quid spread round the 300 people allowed inside Villa Park when we get back to playing in the league and we can report that we’ve won all six of our home matches. That should give us enough points to stay up and who’s going to say any different?