“It’s not just a theatre company, it’s a movement.”

In 2015, Birmingham Repertory Theatre took part in an initial pilot scheme Up My Street, a partnership project funded by Mind, to help strengthen mental health in young black men through theatre. This scheme was developed in response to statistics that show young black men in the UK are much more likely to develop serious mental illness than any other demographic.

With three years’ funding from the National Lottery Community Fund, Lightpost Theatre Company has since welcomed hundreds of participants aged 18-26 from across the West Midlands who have gone on to create their own productions, perform to sell-out audiences, gain employment and training within the industry and create new leaders for a new generation of members.

CJ said: “Lightpost is not just a theatre company, it’s a movement. It has always been the goal for Lightpost Theatre Company to create new Leaders. Because we understand what these young men experience outside of the company, we can help to empower them and support resilience against perceived and proven barriers including lack of opportunity, racism and related stresses.” 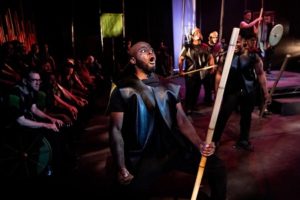 Mathias added: “This is an experience like no other. If you are an 18-26 young male of black heritage and have a keen interest in theatre, then you should join us. Don’t allow others to write the narrative for you. Get yourself in the room and take ownership, you deserve to be here as much as everyone else.”

This week marks Mental Health Awareness Week and Alex Summers, Creative Learning Director at The Rep added, “We are delighted to welcome back Mathias and CJ to lead Lightpost Theatre Company. This progression is what the company is all about, providing participants with the support to recognise their talent, help them with their career and provide a voice within the wider community.”

Mathias (pictured) and CJ will be supporting new members, organising workshops, writing and rehearsal sessions and leading the creative team into realising their artistic vision. The company work with professional directors and writers to create, rehearse and stage outstanding productions reflecting their own personal journey or themes affecting the wider community. These have included a sell-out run of Scenes From A Brummie Iliad based on Homer’s epic poem, an original performance reflecting on mental health for the 2019 BEDLAM Arts and Mental Health Festival and a performance in a secure unit through Birmingham and Solihull Mental Health NHS Foundation Trust.

Lightpost Theatre Company usually meets at The Rep once a week but thanks to Rep Reloaded’s digital offer the company can continue to work on their current project Constructed during the current lockdown period. Constructed is a play about Black British male construction workers, using the construction site as a metaphor for new beginnings. The play will premiere at The REP and tour community spaces.

Lightpost Theatre Company is part of Shifting The Dial a unique scheme funded by the National Lottery Community Fund and is a partnership between Birmingham Repertory Theatre, Birmingham and Solihull Mental Health NHS Foundation Trust, Centre for Mental Health and First Class Legacy.

Centre for Mental Health’s Kadra Abdinasir, Head of Children and Young People’s Mental Health says, “This ground-breaking partnership offers young black men a range of holistic and culturally-informed activities to engage with to help boost their mental resilience. This includes youth-led creative opportunities, such as the productions developed at Lightpost Theatre Company. The programme also empowers young men by building their skills and confidence and creates leadership and employment opportunities to enable them to transition into independence.”

Interested in becoming a member of Lightpost Theatre Company? Email learning@birmingham-rep.co.uk
If you are an individual or organisation and would like to help The Rep to support talented young people whose families maybe struggling financially at this time you can make a donation here.