A food bank operating from Broad Street which says it’s never been busier than during the ongoing coronavirus outbreak has won the latest #WestsideHero award.

The Blessed2Bless Community Project, based in The Square, has been running its vital food bank service in the area for about 12 months. 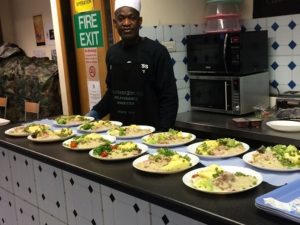 The charity, which originated in the United States before coming to Britain nearly six years ago, has now extended its help by offering cooked meals to frontline NHS and care staff.

Pastor Lebert Dawkins, who has previously experienced homelessness himself, said Blessed2Bless was a charity that helps feed the homeless and those struggling financially.

He said: “The food bank is just on a Saturday but demand is increasing due to coronavirus. More people are losing their jobs and becoming homeless. We have seen the crisis grow with demand increasing every week.”

Pastor Lebert said they were providing around 75 food parcels which were given out to people in Birmingham as well as further afield such as West Bromwich and Wolverhampton.

He added: “Some of the food we receive comes from supermarkets, but it is also donated by individual people.

“We would love food donations to continue to help those in Birmingham who reach out to us every week requesting food and help because they have no money, no roof over their head or are just struggling to survive in this current climate.”

The doors to the food bank are normally open on Saturdays between 1pm and 2:30pm. Visitors are required to maintain two metre social distancing in accordance with guidelines. Blessed2Bless has also been providing hot meals to NHS staff and frontline workers fighting the Covid-19 pandemic since 9 May.

Pastor Lebert said: “It’s a new thing we have started because of the work they are doing on the front line. They need all the support they can get, so we are serving them hot meals to collect.”

Elaine Weir, the business liaison manager at Westside BID, said: “This charity food bank provides a valuable service to those less fortunate than ourselves, and it is proving to be particularly useful during the present pandemic. We’re please to make Blessed2Bless our #WestsideHero of the week in recognition of their services.”

Find out more about Blessed2Bless here.

This story first appeared on westsidebid.co.uk