Richard Lutz wanders through the Land of Lockdown.

There’s a buzz in the air in the woods that loop in a green crescent around the village of Strathcarrick on the Scottish west coast. “Bees,” says Colley, who drags up lobster from a small boat. Nice to be told about bees from a fisherman.

I find a colony of these forest hives. If you stand nearby, on a quiet day with no sea wind travelling northeast from the Antrim coast, you can be surrounded by the buzz. It’s all hardwood around the spot so there’s plenty of wild flowers for the bees to feed on. But I still wonder if we can get oak or ash honey from this busy lot in the woods.

I return to Strathcarrick, where I deliver food and the necessaries to folks who need it during this, the time of lockdown. One person who certainly doesn’t need my help is Jim K. He ran lorries for 34 years and now he’s putting his feet up. 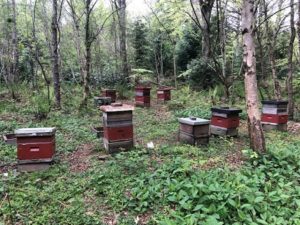 Watching Jim K bustle and work his garden, I wonder what he considers taking a rest after three decades of driving up and down the infernally overcrowded motorways and the patchy side roads of Britain. He never stops.

Today, Jim is painting his fence. He’s always busy in his immaculate boilersuit and he has an eye for the colour grey, changing the old wood from light grey to a terrific shade of battleship grey.

He’s a stickler for precision, not a dot of paint on his work clothes or the pavement. But the painting is a Sisyphian task. “Cars have crashed into this fence eight times since I moved here,” he explains as he non-drippingly takes care of a tricky spot on the fence underside. “I’m on a blind bend.” He points to the curving downhill road into Strathcarrick with his immaculate brush. And he is right, it’s a road that turns suddenly on a small hill after a long descent on a straight bit. Just right for boy racers.

“Eight times,” he repeats, “and three of them come from Crossmill,” he adds, referring to a tiny whitewashed hamlet that cuddles into the nearby Southern Uplands. Jim K keeps on painting, as needs be if the fast boys from Crossmill have anything to do with it.

The Lockdown – even the new Lockdown Lite- means on sunny days families take to the long beach that separates Strathcarrick from the blue blue sea. Kids shout and scream as they jump in and out of the waves that ripple in.

What is it about kids and a beach? Get ’em within ten yards of a salty body of water and within micro-seconds they’re shouting their heads off. It’s the sound of the shore along with a jolting call of the oystercatchers overhead and a fishing boat puttering past on the Clyde. I guess all the kids shouting happily is simply a primal sensation…primal being a word I’m using more and more these days to explain something I don’t understand.

Back at Jim K’s fence-a-thon, he’s ready to clean the brushes,roll up the sheets, put away the paint. Then, it’s off to maintain his phalanx of motorcycles. He’s got Triumphs, BSAs, a Japanese model or two. They’re all gleaming, all black and chrome. “I’ve had bikes all my life,” he says. “I was at the Isle of Man TT races back in ‘54. Love my machines.”

Then, with a lowering of his voice: “Even had a Bultaco.”

A Bultaco? He nods. And he says it again, this time a bit slower: “A Bultaco.” The paint tins are shut tight. “Primal,” I say. “Absolutely primal.” All around us, the bees are buzzing and the weather is turning. turning. turning, warmer.