New book set to reveal the secrets of the M6.

Award-winning writer Andrew Shanahan is writing a new book that will be based on the stories and secrets of the 232 miles of the M6 Motorway.

The M6 motorway is definitely something that inspires strong feelings, whether that’s love, hate or simply boredom. This is the sort of emotional material that award-winning writer Andrew Shanahan (pictured) will mine in his new book 232 Miles Of. 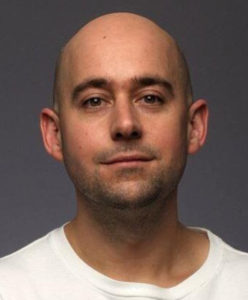 The most obvious question is: why would anyone want to write about a motorway?

“It’s an excellent question and one that I’ve been wondering myself some days! The real attraction is that along its 232 mile length, the M6 carries over 200,000 vehicles every day. What I’m interested in finding out is less about the tarmac and bridges, and more about the unheard human stories that have taken place on or near the M6.

“The final book will have 19 stories – one for every junction – and based on the responses received so far it will be a mix of the terrifying, the tragic and the hilarious.”

The M6 is the UK’s longest motorway and the first section – which was known as the Preston by-pass – was officially opened on 5th December 1958. Unfortunately, it only lasted a month before it needed to be closed due to the deterioration that the road surface had experienced.

Many M6-users would argue that this laid the foundations of a chequered history of road improvements and speed restrictions, which often frustrate the daily users of the road. Even today sections of the road cause controversy, with the latest being the stretches of smart motorway which have seen the hard shoulder employed as a fourth lane to ease congestion.

“I can understand the frustrations that people feel towards the motorway, although many users seem to feel that beyond Preston heading north, the experience of driving it is mostly very pleasant. The stories and anecdotes that I’m looking for people to share range from the banal, such as the truth of their daily commutes, to the extraordinary.

“It could be a hilarious anecdote of something that happened, or something that you’d like to get off your chest. All information can be shared anonymously, and the final stories will be fictionalised.”

Shanahan has been a journalist for over 20 years, winning awards for his work writing about everything from food to health. His first fiction book, Before and After, was published in January 2020 and has since become an Amazon best-seller.

“When I was looking for something to write my next book about, I decided I wanted to write a series of shorter, connected stories and I’ve been obsessed with my M6 all my life. I’ve always lived within hearing distance of it and it just seems to hold a profound place in my imagination.

“That’s probably deeply sad, but it leads me to wonder how many other people have a similar connection to it for whatever reason – that’s what 232 Miles Of is interested in finding out.”