One of the biggest R&B recording stars that Britain has ever produced, the singer-songwriter has sold more than 30 million records worldwide, achieving number one spot on pop charts in the UK, USA, Australia, Germany and Holland. 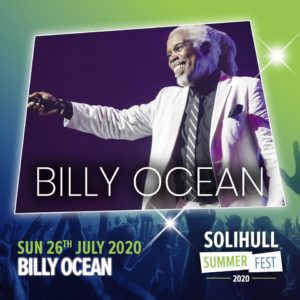 Billy Ocean is the final act to be announced for the biggest line up to date at The Solihull Summer Fest. The Trinidadian-English musician won a Grammy Award for Best Male R&B Vocal Performance for Caribbean Queen and in 1987 was nominated for the BRIT Award for Best British Male Artist.

Organiser, Ian Rogers, said: “We’re delighted that so many incredible acts want to be a part of Solihull Summer Fest. The response to this year’s line-up has been fantastic and ticket sales so far have exceeded all previous years – we are currently on course to have a sell out event. We cannot wait to welcome everyone for an incredible weekend of live music and entertainment.”

Tickets are still available at Early Bird prices whilst stocks last. For more information and ticket options – including VIP and Premium choices – visit www.solihullsummerfest.co.uk or visit the Summer Fest Ticket Outlet at 150 High Street, Solihull, B91 3SX (opposite the Masons Arms).