I’m on holiday in Goa, so when I heard that FC Goa were equal top of the new India Premier Football League, I thought it was worth a twenty quid taxi fare to see what the Indian football experience was all about.

Their stadium holds 20,000 and is an impressive round bowl which probably doubles as a cricket pitch at other times of the year. The drawback is that the all-seater crowd is some way away from the pitch. The tickets start at a fiver, which 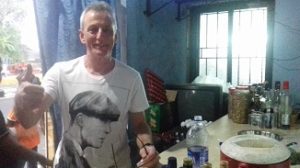 unfortunately means that it is out of the reach of many Indians and is therefore more of a middle class day out.

FC Goa are sponsored by Kingfisher but you wouldn’t know it because the only place to get a drink was a small bar hidden by a curtain, which was about as big as our small kitchen and myself and my mate Rob made up almost half of the drinkers on our arrival.Food could be purchased in the ground but was a disappointment because only chicken burgers were on offer as the advertised samosas weren’t available – and not a Balti pie in sight!

The ground was about half-full against a struggling opposition but the support was certainly enthusiastic applauding every endeavour, rarely moaning in contrast to a typical EFL supporter.

The crowd announcer also doubled as cheerleader with cries (bizarrely) of “Forza FC Goa”. The football was skilful and on a par with the EFL but the slow pace of the game was in contrast. The choice of the final ball tended to be poor and there was a lack of sharpness in the box – a bit like the current Blues now I think about it. However, it was pleasing to see FC Goa score two in the last ten minutes to win the game albeit via an own goal and a penalty.

Either way, it was an enjoyable outing and we bought an obligatory pirate version of the football shirt from a shifty looking trader trying to avoid the attentions of the police. The guy tried to charge us a fiver each but thanks to a bloke who we bought a Kingfisher beer in the bar, we got them for the ‘locals’ price of £1.50p… Bargain!!

One thought on “Football – it’s not cricket”