A programme of workshops delivered to highlight the dangers of diabetes has proved to be a real tonic for local residents.
Eight weekly sessions at Perry Common Community Hall, organised by Witton Lodge Community Association in conjunction with the Seventh-Day Adventist Church, culminated in a graduation ceremony for those who successfully completed the programme. 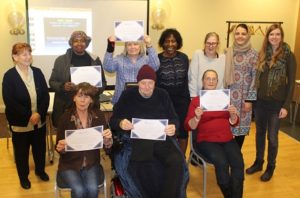 The workshops, branded Reversing Diabetes, targeted people aged fifty and over and aimed to raise awareness of the condition in order to control it better.

Wellbeing Officer at Witton Lodge, Fauzia Begum, said: “The sessions focussed primarily on diet and lifestyle by highlighting trigger factors such as stress and (lack of) exercise.

“The aim of Reversing Diabetes was to empower people to take better control of their health so they can lead fulfilling, active lives.”

Wednesday’s graduation saw those who had completed all eight weeks of the workshop presented with their certificates of achievement by Grace Walsh from the Seventh-Day Adventist Church.