In fact, it’s a Mrs Barbara Nice lunch – as stand-up comedian Janice Connolly will be introducing her alter ego, a caricature of a middle-aged housewife from Kings Heath, when guests meet at the Circle Restaurant, Birmingham Hippodrome, on Wednesday, 18th December.

Mrs Nice (pictured) commented: “Blinking heck, kids. I am proper made up to be invited to the Birmingham Press Club Christmas lunch. I used to do a bit of cleaning there back in the day and to return as a guest is like a dream come true!”

Janice’s creation has been wowing the comedy circuit for the last two decades, including the Edinburgh Festival Fringe, and her act, which is heavily reliant on interaction with the audience, won her a semi-final place in Britain’s Got Talent earlier this year. 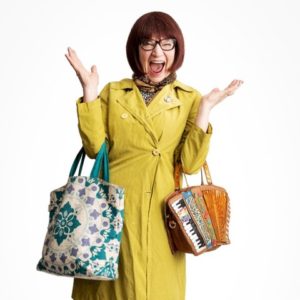 But Janice, who studied drama at the former Birmingham Polytechnic, now Birmingham City University, is much more than just a comedian. She has recorded a comedy series for radio and is also a successful actor, having appeared in Peter Kay’s Phoenix Nights, two stints on the cobbles in Coronation Street and the stage adaptation of Meera Syal’s novel Anita and Me at the Birmingham Rep, for which she was acclaimed for her comic talent.

In Phoenix Nights she appeared as cleaner and bartender Holy Mary and reprised the role in Max and Paddy’s Road to Nowhere.

Janice, who lives in Kings Heath, is also the artistic director and a founder member of Birmingham-based Women and Theatre, which performs in a variety of settings such as schools, arts centres, health centres and conference halls, staging plays which investigate social issues and taboo subjects such as domestic violence, homelessness and drug issues.

In 2017 she was awarded a British Empire Medal in the New Year’s Honours List in recognition of her contribution to community arts.

Individual tickets for the lunch are £46, including VAT. To make a booking email Press Club vice-chairman Fred Bromwich at [email protected]