Birmingham schools and retailers link up for uniform giveaway.

Two local schools have received a dozen rucksacks full of school uniform, which will be given to the parents of pupils that may be struggling financially to cover the costs of a new uniform.

West Midlands-based schoolwear supplier Clive Mark donated the garments to Lordswood Boys’ School and Central Academy in Birmingham, whilst tie and bag manufacturer William Turner donated the rucksacks themselves. The two schools will be able to 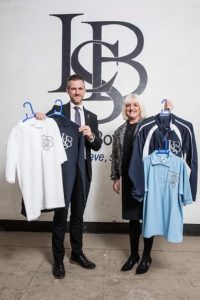 provide parents they identify as being most in need of support with a full school uniform items include blazers, jumpers, trousers, and shirts.

The donation was part of a campaign from The Schoolwear Association, which is urging uniform suppliers and retailers to donate what they can to local schools in their communities.

Commenting on the campaign and the inspiration behind it, David Burgess, chairman of the Schoolwear Association, said: “We are excited to launch this campaign as it is something we have wanted to do for a while as an association. The first term back at school can be difficult for some families, with the summer break and upcoming festive period often taking its toll on finances.

“The association recently launched its ‘every child is worth it’ campaign, and knows that every child should be clothed in durable, high quality and presentable school uniform to help them get the most from their education. All of our members are passionate about school uniform and allowing children to get the most from their education is why this campaign is so important to us.”

Jim McNicholas, Managing Director of uniform supplier, Clive Mark, said he was proud to be involved in the campaign. He commented: “Many parents often aren’t aware of the offers and schemes that are in place with many specialist uniform retailers which are designed to provide an affordable quality uniform for their children.

“It’s great to be a part of a campaign that will give parents who are struggling one less thing to worry about at an expensive time of the year and enable their children to get more enjoyment out of their time at school.”

David Bailey, Headteacher at Central Academy commented on receiving the donations: “I am delighted to receive uniforms and back packs on behalf of Central Academy for the first Giveaway campaign. Our students and families will benefit from these gifted items and I know they will be gratefully received.”

You can find out more about the Schoolwear Association here