What better start to the Christmas celebrations could there be than a performance of Birmingham Royal Ballet’s production of The Nutcracker?

Enchanting, glittering and romantic, Sir Peter Wright’s version that he dedicated to the city of Birmingham and celebrates its thirtieth anniversary next year simply has it all.

The festive magic begins with family and guests at a Victorian Christmas Eve party at the home of the Stahlbaums being entranced by the lighting of a Christmas tree.

It continues with the mysterious Drosselmeyer (Jonathan Payn) performing tricks and giving out presents. These include a Nutcracker doll to the daughter of the 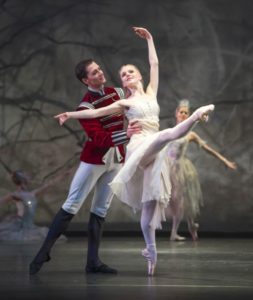 house Clara, whose love for the toy takes her on a fantastical journey as the clock strikes midnight.

With theatrical brilliance, a fireplace is transformed into a castle and a living room into a battleground as the toy comes to life as a Prince to fight an army of giant rats. We then go on to see Clara carried through the clouds to the Land of Snow on the back of a swan.

Karla Doorbar, as Clara, and César Morales, as the Prince, made a touching couple as the romantic pairing on opening night, with Doorbar bringing a vivid wonderment and innocence to her dancing and Morales looking every inch the high-kicking charmer.

The wintry scene featuring Samara Downs as the Snow Fairy dancing with her Attendants and Snowflakes in their all-white tutus and the Winds was spellbinding, while the series of divertissements featuring dances from different cultures brought on some bravura performances, most notably a beautiful Arabian Dance led by Delia Mathews.

But the show’s highlight was the grand pas de deux danced exquisitely by Morales and Miki Mizutani, a late stand-in as the Sugar Plum Fairy after it was announced that Momoko Hirata had been taken ill. Mizutani danced the role as if she was born it.

BRB’s glorious Nutcracker costumes and sets designed by John Macfarlane are being revived and restored as part of a major project for the production’s thirtieth anniversary, although they still looked wonderful enough to bring gasps of delight from the audience.

The sumptuous Tchaikovsky score played expertly by the Royal Ballet Sinfonia under the baton of Paul Murphy would have been enough to send home anyone in festive mood.

The Nutcracker is in performance at Birmingham Hippodrome until Saturday, December 14th (Tickets & information 0844 338 5000/ www.birminghamhippodrome.com)