Richard Lutz takes a pew for a Cuban spectacle.

As if to test his new home, he brought his company, Acosta Danza, to The Birmingham Hippodrome for a quartet of numbers. Besides the singular allure of the city’s newest resident (come 2020, that is), many were coming, or returning, for that Rolling Stones cycle he has perfected over the years. He takes mid sixties/early seventies  Stones material, all sharp suits and macho posturing, and gives it modern flair, fluidity and, of course, sheer cockiness.

Numbers such as Little Red Rooster, Paint It Black and Sympathy for the Devil bounce off the Hippo’s big stage, despite  some fuzzy over-amped music. Acosta himself, ready to hang up his dancing shoes for an executive chair, pitches in dominating the stage when he appears. 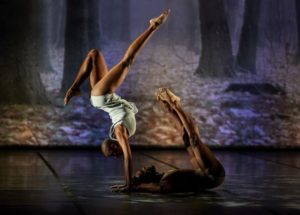 The evening comes loaded with other productions, full to the brim with superb Cuban talent. Satori is a Zen influenced opener with lead dancer Zeleidy Crespo. She is graceful and, with her height and shaven head, an unearthly dynamic presence. Techno music is by Pepe Gavilondo. She re-appears in Faun, a bit of a romantic  number with music by Debussy but with deeply sensual overtones about sexual awakening in the bosom of a deep forest.

All told, a wide range of material. But to me, it’s all dominated by the Stones hits and the image of Acosta in his gaudy pink short and tight tight trousers creating the cockiness of Howlin’ Wolf’s gruff Little Red Rooster as he struts along the Hippodrome stage.