Extinction Rebellion Youth, a network of young people campaigning against climate breakdown and biodiversity loss, will host a protest at Primark and HSBC in Birmingham City Centre on Saturday 2nd November at 11am.

More than one hundred students and young people will take part in the protest highlighting the devastating impact the fast fashion industry and continued investment in fossil fuels has on the environment. 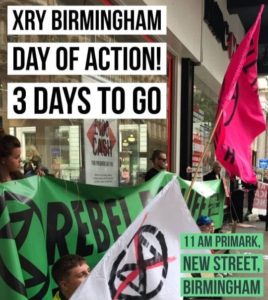 The Birmingham protest follows the October International Rebellion which saw Extinction Rebellion groups and allied movements gathering in major cities around the world for two weeks of Non-Violent-Civil-Disobedience. This extended action was to raise awareness and rebel against the world’s governments for their criminal inaction on the Climate and Ecological Crisis.

The protest on Saturday will include students from the University of Birmingham and young people living, working and studying in Birmingham and the wider area. Together they form part of XR’s Youth movement, a generation whose future will be the most severely impacted by how the world responds to the climate crisis.

The group will aim to disrupt business as usual by lying down outside the entrance of Primark. They will then move on to HSBC New Street, where some participants will attempt to ‘lock on’ using D-locks to secure their heads to the premises.

This non-violent direct action is to highlight HSBC’s role in the climate breakdown and that it has poured a reported £43 billion into fossil fuels over the past three years. In addition, the group aim to show how the fashion industry produces 10% of all humanity’s carbon emissions, is the second-largest consumer of the world’s water supply, and pollutes the oceans with microplastics.

A spokesperson from Extinction Rebellion Youth Birmingham, said: “We want the government to start acting in accordance to the scale of the crisis we face. That means taking action to prevent companies like Primark and HSBC exploiting the earth’s resources in pursuit of profit. We are the inheritors of a broken system. We are the ones never to have known a stable climate. That’s why we have decided to take matters into our own hands. We want our future back.”