Birmingham brewery and taproom Dig Brew Co has teamed up with local opera company Infinite Opera to offer a wicked concoction for Hallowe’en.

Besse, the first-ever beer-themed opera to be staged in a brewery, is returning to the award-winning craft brewery on River Street in Digbeth by popular demand with celebrated American baritone Jared Ice making his Birmingham debut.

The Frankfurt-based singer is a triple winner of the international Kammeroper Schloss Rheinsberg singing competition that included his professional debut as Scarpia in Puccini’s Tosca. He is also co-producer of the award-winning opera podcast Sex, Drugs and Opera, which gives a humorous insight into the opera industry. 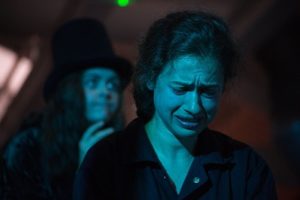 Created by librettist and soprano Roxanne Korda, and composer and conductor Daniel Blanco Albert, both Royal Birmingham Conservatoire graduates, Besse tells the story of a female brewer during the time of the Black Death, when brewing was changing from a domestic industry in the hands of women to a commercial business controlled by men, and when an increasingly paranoid public were starting witch hunts.

Performed on a purpose-built stage around Dig Brew’s brewing equipment, the production will be part of an opera, pizza and craft beer extravaganza being held on Friday, November 1st for Hallowe’en and as a major Digbeth First Friday arts event.

Roxanne Korda, who will also sing the title role, said: “As a local non-profit company devoted to making opera accessible to everyone, we are looking forward to bringing a Hallowe’en night of dramatic entertainment to Digbeth and giving local artists and musicians a unique platform to display their talent. We are also thrilled to have Jared Ice join us an award-winning guest artist.”

Full-price tickets costing £15 include the choice of a craft beer from a wide range that includes a fruity pale ale Maleficarum and a sour Berliner Weisse Hathor’s Revenge, specially brewed for the opera, or a slice of Neapolitan-style artisan sourdough pizza from the brewery’s new Dough Pizzeria.

Daniel Blanco Albert, who will conduct from behind the bar, said: “This is a great opportunity to come and enjoy beer made into music – sometimes merrily crispy, sometimes soured with the frozen cold dagger of drama, and sometimes bitterly sweet. These are definitely two hours of refreshingly hoppy music for all.”

Oliver Webb, a graduate of the Slade School of Fine Art and founder of Dig Brew, which won a national competition run by festival organiser We are Beer this year to find the country’s best up and coming craft beer brewers, said: “We are delighted to welcome back Digbeth’s own opera company after previous productions of Besse performed in three parts in our brewery over separate nights attracted sell-out audiences.”

Oliver added: “We pride ourselves on producing top-quality craft beer and being able to use beer as a unifying force within our local community, helping us to grow Digbeth as a nationally recognised artistic and cultural centre.”

Tickets for Besse – The Beer Opera Hallowe’en Special – on Friday, November 1st are available priced from £12 to £15 here. The show starts at 8pm.