The Bilston delta turns it up a notch next week.

Lovers of the blues will be headed for Bilston next week as a series of international acts take the stage at the Robin 2.

On Monday 26th August Canadian guitarist Anthony Gomes will be making his first appearance at the venue. Since his first album Blues in technicolor was released in 1998, Gomes has released a string of critically-acclaimed recordings mixing rock, soul and country as well as touring the world. His latest album, Peace, Love & Loud Guitars, came out last year. Tickets £11. 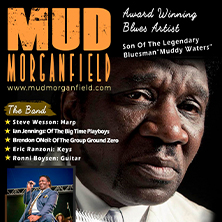 On the following evening the Robin stage will be blessed with blues royalty in the shape of Mud Morganfield. Eldest son of the legendary Muddy Waters, Morganfield only began playing seriously after his father’s death in 1983, but made up for lost time by honing a live act that incorporates his own material as well as classics made famous by Muddy himself. Tickets £19.25.

In a slightly different vein is the main attraction on Wednesday 28th. Geoff Tate spent thirty years as singer with metal band Queensryche,fronting the band during their era of multi-platinum albums and arena tours before a gloriously rock’n’roll departure in 2012, in the wake of on-stage punch-up and subsequent law suits. Now oerforming solo, he remains a memorable live act. Tickets £22.

And finally, Thursday 29th sees two of the Robin’s most regular visitors. Ian Parker & Aynsley Lister aren’t so much mainstays of the British blues scene as largely responsible for its upturn. Last year saw then touring together for the first time in a decade – Ian’s rootsier performance a perfect counterfoil to Aynsley’s rocking blues. Both are accomplished songwriters, and both have the self-penned material to make their studio work as impressive as their live shows. Tickets £16.50.