Simon Hale reports back from the RAF Museum Cosford.

Having felt queasy after only a single spin on a fairground teacup ride, the thought of looping the loop in a Spitfire brought mixed feelings.

Fortunately, the new family attraction at the Royal Air Force Museum Cosford keeps your body still but takes your experience levels sky-high. Put on a pair of goggles and step into your seat at the new Virtual Reality Zone in the Test Flight hangar and you are all set to fly in the most iconic fighter ever built.

For excitement the flight takes some beating as you make low passes over the airfield and loop the loop, before landing and taxiing back to the hangar. It’s six minutes of thrills that truly flies by. With the roar of that distinctive Merlin engine coming through your earphones as you’re travelling at 10,000 feet, this is as near as you will ever get to flying a Spitfire for real. 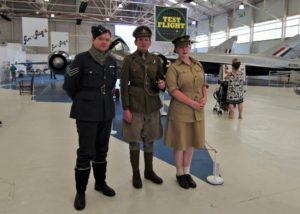 Great value for the £5 charge, the experience which is suitable for those aged 13+ got an instant thumbs-up from this motion sickness sufferer.

The first of several new VR experiences, all specially created on board real aircraft, was launched as part of the museum’s Armed Forces Weekend celebrations, which also included engine demonstrations, military vehicle displays, and reenactors nestled among the historic aircraft displays.

There was also a focus on the Home Front in World War Two, with a performance of Greyhounds by Time and Again Theatre in the lecture hall. Written by Laura Crow who also acted in it, the play provided a moving historical context to modern issues of morality and mental health as wartime villagers struggle to stage a production of Henry V to raise money for their local Spitfire fund.

The museum is paying homage to that supreme aircraft with its Summer of Spitfire programme of activities from July 1st to September 1st. This includes the display of a rare reconnaissance Spitfire PR XIX side by side with one of the museum’s regular attractions, the world’s oldest Spitfire Mk 1.

Other events include the Cosford Food Festival and the Vintage and Handmade Festival from July 20th-21st and August 17th-18th respectively. There will also be a series of Spitfire talks by Candida Adkins, daughter of Spitfire pilot Jackie Moggridge on August 1st, 7th, 15th, 21st and 29th.

For more details of events, click on RAF Museum Cosford. Time and Again Theatre are performing a new brand-new work, Clouds, based on the suffragette movement, at this year’s Edinburgh Festival: www.timeandagaintheatre.com.