After a tour of the centre, Jodie met two of the dogs who were named that day after two of the stars of the show, Annie and her dog Sandy. Both Annie and Sandy are currently being cared for by the centre and were previously unnamed after finding themselves in their care. 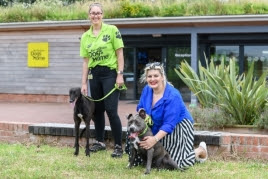 Jodie then presented staff with a brick as part of their ‘Name a Brick’ fundraising campaign on behalf of the theatre and the cast and company of Annie. The campaign helps to raise vital funds for Birmingham Dog’s Home and are displayed within the centre.

The smash-hit production of Anniwe comes to Birmingham direct from London’s West End featuring a Tony award-winning book and score, including the unforgettable songs It’s The Hard-Knock Life, Easy Street, I Don’t Need Anything But You and Tomorrow.

Birmingham Dog’s Home has been rescuing, reuniting and rehoming lost and abandoned dogs across the West Midlands and South Staffordshire areas for over 126 years. Last year, the centre provided care and support for 2,253 lost and abandoned dogs. For more information on Birmingham Dog’s Home and their ‘Name a Brick’ campaign visit birminghamdogshome.org.uk.