Movers and shakers from across the music industry turned out for the launch of Birmingham, Sandwell and Westside Jazz Festival yesterday.

The event, at Marmalade Rep Bar, marked the start of the 35th festival – one of the largest in Europe – and saw Mayor of the West Midlands Combined Authorities Andy Street launch the Combined Leadership Board to celebrate culture across the region.

Mr Street said: “Birmingham Jazz Festival is an incredible event and Director Jim Simpson does a brilliant job and we want to see that enthusiasm and excellence extended across the whole region. 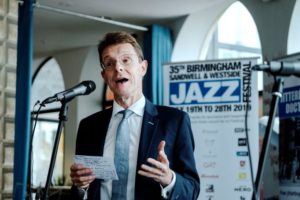 “The creative sector is the fastest growing part of our economy employing 100,000 people across the region. That cultural sector is critical to the economy and defines our society, whether it be music, theatre, art or street activities. It is mission critical to how a place develops and as we head towards the 2021 City of Culture we hope our Leadership Board will join those communities to make a total stronger than their individual parts.”

Other speakers at the launch included comedian and Birmingham entertainment legend Jasper Carrott, Festival patron Digby Fairweather and civic dignitaries from Birmingham and Sandwell. Music was provided by the four-piece Lithuanian band The Schwings, appearing in Birmingham with the support of the Lithuanian Council of Culture.

Director Jim Simpson said: “Once again Birmingham becomes the centre of the jazz world for 10 days and, after 35 years at the heart of entertainment and culture in the area, it is gratifying to see so many key figures in the life of Birmingham and the West Midlands here today.”