Calling all Fortnite fanatics! Insomnia, the UK’s largest gaming festival, is bringing the battleground to the NEC next month, with the epic Battle Royale Zone. Following the success of i64 in April, the competitive gaming event returns but it’s gearing up to be better than ever as the worldwide phenomenon, Fortnite, stars as a featured game for the festival.

From excitable novices to seasoned pros, the Battle Royale Zone lets you put your skills to the test as you battle against 99 other gamers, all at the same time. Following huge demand from last expo, this huge tournament is bigger and better than ever before with 100 playable stations featuring all your favourite games: from Overwatch and Fifa, to Rocket League and Rainbow Six Siege and many more! 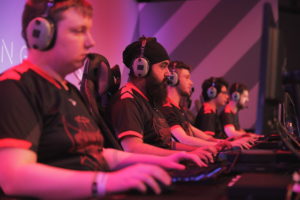 It’s not all fun and games… there are big prizes to be won! Players that earn their victory will prizes with values of up to £1,000! So, get your Fortnite gear ready, as you don’t want to miss your shot!

This shooter-survival game blew up in 2018 and has since become a cultural phenomenon as it has racked up a whopping $2.4 billion in revenue and over twenty awards.

With an estimated player count of 250 million worldwide, there is no doubt that this very special addition will draw in some super-fans to the gaming extravaganza.

If you’re not feeling brave enough for the battleground, there is a variety of other zones to explore whilst you’re at Insomnia. Relive your childhood in the Retro Zone; bump into your gaming heroes at the Meet & Greets; or watch your favourite fictional characters come to life in the Cosplay Zone. The activities are endless and every festival-goer will be sure to find something that takes their fancy.

Phil Crawford, one of the organisers of i65, said: “Insomnia 2019 is the most highly anticipated one yet and we can’t wait to see both old and new faces at the festival. The different themed zones and activities welcome all ages and abilities, so everyone can experience what the gaming world is truly about.

“We think the particular highlight of this year’s event will be the addition of Fortnite in our Battle Royale Zone and we predict that it will bring even more people to the festival.”

For more information about Insomnia 2019, take a look at the website insomniagamingfestival.com. Tickets can be purchased here.