Ark at that! Homer’s Trojan war poem gets the Brummie treatment.

Homer’s epic poem about the Trojan War, The Iliad, has inspired countless versions for over 3,000 years, including a Hollywood movie starring Brad Pitt. But a new play at Birmingham Repertory Theatre will give it something it’s never had before – a Brummie accent.

Actor Roderick Smith has breathed new life into the classic story of heroes and gods while also celebrating the local vernacular. Performed by The REP’s Adult Drama and Lightpost companies it runs for three performances only from Friday 19th to Saturday 20th July.

Homer’s Iliad tells the story of the darkest episode in the Trojan War. At its centre is Achilles, the greatest warrior-champion of the Greeks, who is refusing to fight. His leader has stolen his girl and now he’s in a sulk. But without Achilles, the balance of power is swayed in the Trojan’s favour and the gods may need to interfere. 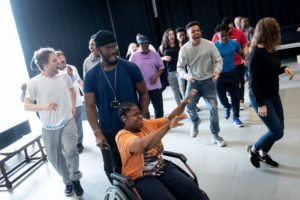 Roderick Smith, who grew up in Birmingham, has adapted Homer’s striking vision, re-writing it in a Brummie accent and re-imaging it as Scenes From A Brummie Iliad. For this retelling Roderick wanted to do a version that celebrated the accent that he grew up with: “I wrote Scenes From A Brummie Iliad as a response to a challenge from another writer when we were talking about regional accents.

“Brummies have too often in the past been portrayed as either low comedy characters or a bit thick and it’s time to challenge that tired old calumny. The Brummie accent is beautifully musical, wistful and serious with a vein of dry humour running through it and ideal for tale-telling. I am massively excited to hear and see my version of Homer’s epic brought to a new, vibrant life at The REP by so many committed, talented and enthusiastic performers.”

The REP’s Adult Drama Company is made up of 60 local people aged 25-70+. Launched in 2018 the Adult Drama company began life following The REP’s large-scale community productions of Stadium in 2017 and Woyzeck in 2018. Many of the participants from both these productions wanted to continue being involved in drama activites at The REP. This will be the company’s first production.

Lightpost Company is a company made up of 20 local African Caribbean men aged 16 – 26. The company originated as part of Up My Street; a pilot scheme that aimed to strengthen the mental health resilience and wellbeing of young African Caribbean men. Now part of a three-year project to further those aims, Shifting The Dial, the company meets once a week to work alongside artists and facilitators who they can relate to, trust and can inspire them for their futures while improving their self-esteem and self-belief and assist their personal development and life skills.

They have previously staged a show at The REP based on their experiences of mental health; another show, Zulu Blue turned the spotlight on racism in football, and most recently, The Place For Me, based on the Windrush generation, was performed as part of the Festival of European Youth Theatre.