Rod Stewart plays Molineux, with Richard Nevin in the crowd.

I wouldn’t imagine many gigs include both an Irish rebel song and a fulsome tribute to those involved in the D-Day landings, but then Rod Stewart has always been something of a paradox. A bravehearted Scotsman with a Cockney accent, a mod with terrible dress sense and a singer who can boast some of the best and some of the cheesiest music ever committed to vinyl.

Perhaps this is why he still continues to draw huge audiences to his gigs and this one was no different, with thousands trotting around the pubs of Wolverhampton before making the short walk to the other side of the ring road and taking their seats in a venue usually famous for games, goals and just recently, lots of gap minding. 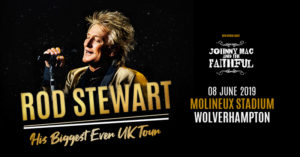 It wasn’t all plain sailing though, as an enormous queue had built up for pitch level seating while those in the stands strolled in, there was much frustration but in fairness the mass of people moved relatively quickly but not swiftly enough for us to catch most of the support acts set.

Johnny Mac and The Faithfull opened proceedings, friends of Rod and de facto cheerleaders for Glasgow Celtic F.C, they were an energetic and enthusiastic if somewhat route one in their approach. Think a more user friendly Pogues and you’re getting somewhere near.

The autumn-like weather that had dominated the best day of the week cleared and blue sky and late evening sunshine greeted the headliner, fireworks adding to the drama as Stewart and his band, which at times looked to made up entirely of attractive females, took to the stage.

You get a bit of everything at a Rod Stewart concert, which is why he tends to attract a wide range of people to his gigs, although almost all middle-aged and above. You have tartan-clad super-fans, curious onlookers and a sight that is becoming less common than it was, the Rod-a-like. Rather thin on the ground and up top due to failing health and failing follicles, those curious men whose way of demonstrating their respect and admiration for an artist is to sport an identical hair-cut, one far more suitable for someone twenty years younger. See also: Weller-likes.

Greatest hits mix with odd covers, stools come out for an acoustic section (very Vegas but then he is not averse to a residency in Nevada), the 74 year old quits the stage in favour of the band for a couple of numbers, and the whole thing is bought to a close with more fireworks from the car park and a cover of R+B (the old sort) classic Rollin’ and Tumblin’.

As the final song proves, Rod Stewart never shies away from his roots, and if you cringe at Do Ya Think I’m Sexy, you can always cry with First Cut is The Deepest, sway along to Sailing or Twist the Night Away as Rod does Sam Cooke.

Molineux is one of the most accessible grounds in the country so getting away is fairly trouble free, and if you wanted to continue the party, there are plenty of city centre options. A bit more sunshine wouldn’t have gone amiss but as enormo-gigs go this was on the more pleasant side even with the absence of any Faces stompers. Next time please , Rod, next time.