Birmingham Royal Ballet has announced that Birmingham Airport will be its first ever Principal Partner. This partnership comes during the airport’s eightieth anniversary year.

Freefall Dance Company is comprised of ten adults with severe learning disabilities and has been creating and performing daring, ground-breaking and award-winning dance since 2002. By combining the dancers’ exceptional talents and individual styles, Freefall has repeatedly challenged and amazed audiences locally, nationally and internationally proving their artistic potential.

The company’s impressive performance films have received international acclaim and Birmingham Airport will be funding its latest film After Bach – Freefalling with Bintley. The film will then be launched at an exclusive event at the airport, where Freefall will also hold a public performance. 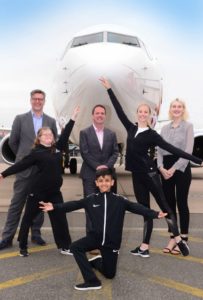 Dance Track is BRB’s talent identification programme aimed at training young dancers aged from six to eight. The project endeavours to identify and train young participants showing a potential for ballet and to instil a passion for dance at an early age.

Every year eighty children who show a talent for dance are invited to join the Dance Track programme. The participants, who often wouldn’t otherwise have an opportunity to participate in dance, are given free weekly ballet lessons taught by Birmingham Royal Ballet staff.

Through this new partnership Birmingham Airport will enable one new school in the north-east area of Birmingham to join the Dance Track programme, giving more children in the city access to the world of dance.

As well as this there will be other activities throughout the year such as dance workshops with Airport staff in the BRB studios and live performances from Dance Track and Freefall.

Birmingham Royal Ballet’s CEO Caroline Miller OBE said: “Birmingham Royal Ballet is excited to welcome Birmingham Airport as our Community Engagement Partner. Like BRB, Birmingham Airport is a prestigious and highly respected West Midlands brand and we are delighted that this partnership will shine a light on two of our most valuable community programmes, Freefall and Dance Track, benefitting talented young adults with learning difficulties and local primary school children.

“We know that together we will make a real difference to our community and continue to change lives through dance.”

“These two unique projects are a great opportunity for the airport to be involved in a world class company that is reaching out to the community, so that everyone can experience the magic of dance.”