In his final season, Bintley has stepped back to 1989 and his first fully realised narrative work, created for Sadler’s Wells Royal Ballet before the company relocated from London under its new name.

Based on the Harold Brighouse 1916 comedy, Hobson’s Choice has delighted audiences ever since – and opening night at Birmingham Hippodrome was no exception.

With its wonderful dancing and characterisation, detailed costumes and sets, and melodic and memorable music, the show had everything you could ask for. 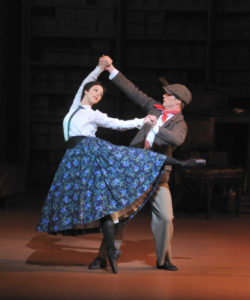 It even included audience participation with an invitation to sing along to The Lily of Laguna, shoehorned into the folk-melody woven Paul Reade score.

Love between the classes, domestic strife, the ‘demon drink’ and escapism are among the Victorian themes explored in acting, mime and tap dancing as much as traditional ballet.

Northern boot shop owner Henry Hobson, in a perpetual state of inebriation, won’t let his daughters marry as he needs them to look after the shop and care for his creature comforts.

The plot is driven by his slightly dim apprentice Will Mossop who is selected by Hobson’s eldest daughter Maggie as marriage material and a future partner in her own plans for a new shop.

In those roles, Samara Downs and Lachlan Monaghan interacted and developed their characters with great charm, humour and conviction.

Jonathan Payn’s Hobson was suitably bombastic but more of a caricature drunk as he meets his downfall (literally) falling into a cellar trap, an event that Maggie manipulates by forcing her father to accept the sisters’ marriages or appear before a court for trespass and damage.

The first of Hobson’s ‘Choices’ leads to another as he is forced to choose between bankruptcy and changing the name of his shop to ‘Mossop & Hobson’.

Laura Purkiss and Delia Mathews gave the central characters top-notch support as the sisters Vickey and Alice. So too did Mathias Dingman and Rory Mackay as the fiancées Fred Beanstock and Albert Prosser.

Indeed, all the romantic and intimate scenes were genuinely touching, as were the big ensemble scenes, especially the extraordinarily detailed set pieces with the Salvation Army who were danced almost exclusively by principals.

With its eye for detail, witty social observatory and sumptuous dancing, this was David Bintley ballet at its best.